PSNI looking into priest who admitted working with IRA 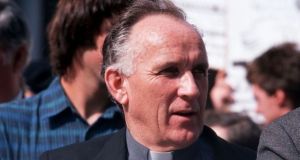 Patrick Ryan: “I would have liked to have been much more effective than I was but we did not do too badly.” Photograph: Eamonn Farrell/RollingNews.ie

The police in Northern Ireland are examining a BBC interview with a former priest turned IRA member who admitted obtaining money and bomb components for the organisation, the PSNI Chief Constable has confirmed.

Simon Byrne said it was “too early to say” whether police would request the extradition of Patrick Ryan.

Mr Ryan, who is now resident in Ireland, told the BBC’s Spotlight on the Troubles documentary, which was broadcast on Tuesday, that he spent ten years visiting Libya and Europe to raise money for the IRA and discovered timers which made it easier for the IRA to arm bombs without being killed themselves.

Those became a component in the IRA’s bomb-making technology and one was used to detonate the 1984 bomb at the Tory party conference in Brighton, the programme reported. Fragments of the timer were recovered from the rubble.

“I would have liked to have been much more effective than I was but we did not do too badly,” the former priest told Spotlight.

In 1998 the Irish Government refused a British request to extradite Mr Ryan for trial.

Minister for Justice Charlie Flanagan said Ireland had not received any requests for extradition, and in the event of such an application being received it would be “a matter entirely for the courts”.

On Tuesday, the DUP MP Jeffrey Donaldson said the British government should take steps to initiate a fresh extradition request.

Speaking to reporters at a cross border conference on organised crime in Ballyconnell, Co Cavan, the Chief Constable Simon Byrne said there was a “specific line of enquiry we’re now going to examine”.

“I’ve got one of our assistant chiefs looking at that today to see if there are fresh lines of enquiry,” he said, to see if a past decision needed to be reviewed.

“Clearly when new information comes in we need to see does it corroborate what we already know, and if we have to go to the point of seeking extradition that’s a conversation we’ll have with Drew [HARRIS]and his colleagues,” he said.

Mr Flanagan said he had watched the programme, and was “shocked, dare I say horrified, at some of the public utterances that were made by persons who participated in the programme.

“I acknowledge a call on the part of the northern politicians for extradition of particular individuals,” he said. “I won’t comment on any individual case but what I will say is no application has been made for the extradition of anybody.

“In the event of such application being made it will be a matter entirely for the courts and not a matter for me as Minister for Justice,” he said.

Questioned in connection with the previous decision not to extradite Mr Ryan, Mr Flanagan said it had been dealt with under the rule of law and based on the evidence that was available at the time.

“I’m sure these issues will be dealt with through the appropriate channel and that is the Irish courts,” he said.

He also cited the “changing circumstances” of the UK’s potential exit from the EU on October 31st. In such circumstances, he said, “the European arrest warrant and other appropriate evidential issues will unfortunately fall,” he said.

He said it was essential that every effort be made on the part of politicians to avoid a no deal Brexit.