IT Tralee ‘overstaffed and has significant money issues’ - report 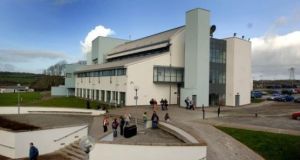 File image of IT Tralee

An independent review of finances at Institute of Technology Tralee has concluded that the institution is overstaffed, losing money and experiencing significant cashflow difficulties.

The Irish Times has learned that the Higher Education Authority (HEA) commissioned a review into IT Tralee last year amid concerns over its financial position. The institute currently has 3,500 full- and part-time students, employs about 350 staff and operates on two campuses in Tralee, Co Kerry.

The review, carried out by Deloitte and finalised in recent months, is understood to express concern about the growing deficit at the college, which it forecasts could rise to €4 million in the coming years, and also raises questions over IT Tralee’s future funding projections.

It says the institute will need to find €3 million to fully complete the Kerry Sports Academy, a centre of excellence on campus which will be used by students and county GAA teams.

The concerns come at a sensitive time, given plans to merge IT Tralee with Cork Institute of Technology (CIT) to create a technological university for the Munster area. The scale of financial challenges at IT Tralee has raised alarm within some circles at CIT on the basis that the Cork institute would likely face absorbing these deficits.

IT Tralee declined to comment, except to say its audited accounts to August 31st, 2017, will be a matter of public record by the end of next month.

“The institute will not be providing additional information on its financial status at this time,” a spokeswoman said.

In a statement, the HEA acknowledged that for some time IT Tralee has been in a “challenging financial position”.

“The HEA continues to monitor this situation and work with ITT as it seeks to stabilise its finances,” it said.

Sources familiar with the report’s findings say the institute’s funding difficulties are partly linked to a sharp decline in full-time student numbers, which fell by more than 15 per cent between 2014/15 and 2017/18.

Based on its own accounts, the institute projects it will not generate a surplus until 2021/22, with improvements driven mainly by a rise of more than 20 per cent in student numbers over the next five years.

However, the report says third-level student numbers nationally are only projected to rise by just 7 per cent in the same period, according to sources.

In addition, census figures for the Kerry area show a slight decrease in the college-going population over this timeframe.

Sources also say the report says the institute appears to be overstaffed relative to its student numbers.

One recommendation is that the Government set up a voluntary redundancy or early retirement programme, though sources say this would only be an option if it was available across the third-level sector in general.