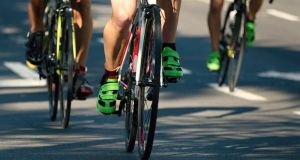 Local mothers no longer bring their children to walk or cycle along the Clontarf road promenade, it has been claimed. Photograph: iStock

A woman wrote to Dublin City Council calling for the introduction of cycle speed limits on the promenade between Dollymount and Sutton after she claimed her toddler was nearly run over.

In the letter, released as part of a Freedom of Information request, the woman said local mothers no longer bring their children to walk or cycle along the promenade because of fears over safety.

“Myself and my husband were walking along the promenade last Tuesday morning and my toddler was on his tricycle in the bicycle lane,” she said in her letter, sent last summer.

“A couple of very professionally-dressed cyclists came speeding down the bicycle path at lightning speed and began yelling and cursing to get the child off the track.

“My child jumped off his bicycle in terror and ran straight out in front of them. My husband literally dived to push [him] into the nearby grass area where it took us several minutes to calm him.

“The cyclist continued to shout and yell as he sped on with no regard for the child who had a gash in the side of his stomach from the fall. I shudder to think what could have happened if my partner had not stepped in.

She added: “There is no speed limit and speaking to other mothers in the area, they have each had a similar experience, all but one choosing not to bring their children to walk and cycle there anymore due to the very unsafe nature of these reckless cyclists who seem to think the rest of the pedestrians and children are impinging on their territory.”

Earlier this year a number of posters appeared in Howth calling on cyclists to slow down in the Dublin suburb. Messages set out on cartoon posters read, “It’s the Hill of Howth, not the Tour de France”.