State pathologist turns into a ballet dancer once a week 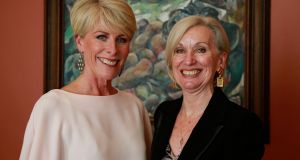 Anne Maher, artistic director and co-founder of Ballet Ireland, with Prof Marie Cassidy, right, the State Pathologist and a keen proponent of ballet, at a fundraising lunch in Dublin. Photograph: Nick Bradshaw

Not even the most imaginative crime writer would put ballet dancing and forensic pathology together. It was no wonder then that the State pathologist, Prof Marie Cassidy, admitted she was an odd choice to be guest speaker at the Ballet Ireland fundraiser in Dublin’s Merrion Hotel.

Prof Cassidy was the ideal speaker, according to the organisation’s chair, Gerardine Connolly SC, who introduced the pathologist as a “true Hitchcock heroine” with an image that is “cool, striking and detached”.

The pathologist’s speech was a mixture of humour and self-deprecation, in which she tried to make light of herself and her chosen profession.

It was a profession so grim, she told the audience, that during a murder trial involving a prostitute in Glasgow, another prostitute told her, “Ach, I don’t know how you do that job, Hen.”

Prof Cassidy described her profession as an “ugly and gruesome world, though CSI tries to make it sexy”, in comparison to “grace and beauty” of ballet.

She said the Ballet Ireland lunch was a glamorous occasion for which she got to dress up, a contrast to her day job for which she wears a “one size fits nobody” white suit so big that she has to wear high heels just to be able to stand in it.

The occasion was the first fundraiser for Ballet Ireland, the country’s only professional ballet company. Some 108 guests paid €120 to attend. The organisation hopes to raise €15,000 to take a production of the ballet Giselle to the Edinburgh Festival.

Prof Cassidy took up ballet at the age of four but was, by her own admission, a “podgy child” who nevertheless entertained dreams of being a ballerina. If Ballet Ireland had a euro for every child who wanted to be a ballet dancer growing up, it would not need to do any fundraising, she said.

Her presence at the lunch was down to a decision she took a few years ago to go to adult ballet lessons for an hour every week.

She said ballet provides “beauty and bright colours. You need anything that distracts you. I’ve never looked back. You have to have balance in your life.

“I do see and hear some terrible things, but you have got to walk away from it and divorce yourself from it. I did discover by going to ballet that it redressed some of the awful things I have seen.”

“Some people say you can have it all. I’m not a believer in that at all. I think you have to make choices. I chose my career and my family and I didn’t have anything in between.