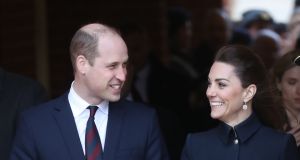 Prince William and the Duchess of Cambridge are set to make their first official trip to Ireland. Photograph: Chris Jackson/Getty Images

The UK’s Duke and Duchess of Cambridge are to make their first official visit to the State, Kensington Palace has announced.

Prince William, who is second in line to the throne, and his wife Kate Middleton will travel to the Republic between Tuesday, March 3rd, and Thursday, March 5th.

The trip will take place at the request of the UK foreign office.

The British embassy in Dublin tweeted: “We look forward to welcoming The Duke and Duchess of Cambridge to Ireland next month.”

The Duke and Duchess of Cambridge will undertake an official visit to Ireland between Tuesday 3rd March and Thursday 5th March, at the request of the Foreign and Commonwealth Office #RoyalVisitIreland 🇮🇪 pic.twitter.com/hIE7dZ6wYR

Further details of the brief tour will be released in due course.

In 2011, the queen made a historic journey to the Republic.

Amid unprecedented security, she became the first British monarch to travel here in 100 years and the first since the State gained independence from Britain.

She bowed her head in Dublin’s Garden of Remembrance to pay tribute to the rebels who rose up against British rule in 1916, spoke Irish in an address to a State banquet and visited Croke Park, where British forces shot dead 14 spectators at a football match in 1920.

The Prince of Wales and the Duchess of Cornwall have made five visits to Ireland over the past five years.

William and Kate’s trip, which unusually was announced in advance, is likely to be seen as a diplomatic visit in the wake of Brexit. – PA