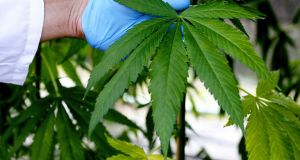 A part-time music teacher who said he grew cannabis to be used to treat a medical condition, has been jailed for a year after a judge noted that he had previous convictions for similar offences.

Gavin Ryan (45) pleaded guilty at Cork Circuit Criminal Court to cultivating cannabis contrary to Section 17 of the Misuse of Drugs Act at his home at Ballymacmouragh, Kanturk, on November 4th, 2018.

Det Garda Will Hosford told the court that gardaí searched Ryan’s house and found a tent in an upstairs room containing five cannabis plants including three mature specimens that had a total street value of €2,400. He said that gardaí also searched a fridge in the kitchen and found two jars containing €1,618 worth of cannabis.

Ryan made full admissions regarding setting up the grow tent and cultivating the plants after his arrest.

Det Garda Hosford said that Ryan was originally from Cork city but had been living in Kanturk for around seven years and had been teaching music on a part-time basis.

Defence counsel Ray Boland BL submitted a medical report on Ryan and the court heard the accused believed that cannabis and insulin were beneficial to him in treating a diabetic condition.

However, Judge Seán Ó Donnabháin took issue with this and noted that Ryan’s GP had pointed out in the medical report that there was conflicting evidence on the benefits of cannabis use.

“He is not an addict but he is dedicated. He told the doctor that he believes that the cannabis does him good. To my mind, that is not a mitigating factor and I am going to treating it as an aggravating factor,” he said.

Mr Boland outlined a process which his client used to make cannabis oil for his diabetes but the judge said growing cannabis for such a use was still illegal and that he believed a custodial sentence was appropriate.

“Growing cannabis is illegal and his behaviour is very entrenched. He has previous convictions for similar behaviour and community service has not led him to change his ways,” he said as he sentenced Ryan to 12 months in jail.