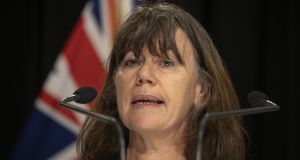 Dr Caroline McElnay grew up on a dairy farm near Bushmills, Co Antrim and went on to study medicine at Queen’s University Belfast and public health at Manchester University. She emigrated to New Zealand 25 years ago.

Now, she is one of the public faces of New Zealand during the corona crisis, appearing frequently on TV screens for lengthy briefings on how the administration, led by prime minister Jacinda Ardern, is fighting coronavirus.

“We haven’t seen the rapid escalation of cases seen in so many other countries because we went into lockdown earlier, before we had significant numbers of cases,” said McElnay, New Zealand’s director of public health.

The country’s ability to curb the spread of the virus has been helped by geography and early decisions to stop travellers arriving.

“Our advantage is that we are an island nation, so we can have strict border controls and that is really helpful,” she said as the number of newly reported cases fell for the third day running.

“What we are doing as a nation is working, and while there are always possibilities of setbacks, at this early stage we do appear to be on track," Prime Minister Ardern said recently.

McElnay emigrated here in 1995 with her New Zealand-born husband. She is a citizen now with three children – Caitríona, Róisín and Connor, whose names were chosen to “remind them of their heritage”.

During 22 years of work in public health, McElnay is no stranger to dealing with emergencies and stress, but says “no training can really prepare you for what it’s actually like”.

“This is the ultimate challenge for anyone working in public health,” she says of the pandemic.

New Zealand’s performance in managing the pandemic to date has been impressive. Like Ireland, its first Covid-19 case was detected at the end of February. While Ireland had recorded nearly 6,000 cases and more than 210 deaths by Tuesday, New Zealand’s current total is about 1,200 and there has been just one fatality.

The number of Covid-19 patients in hospital at any one time has remained in the low teens, while the number in intensive care has never exceeded four. Testing doubled last week, but it brought no rise in cases – the most reassuring sign yet.

Increased testing, in fact, has been followed by a fall in new cases for three days running. Many new cases are linked to known pre-existing clusters, raising confidence that extensive community spread has been avoided.

Nevertheless, it has not been plain sailing. “Like many countries we have significant health inequities,” McElnay acknowledges, “‘and in New Zealand it is seen particularly among our indigenous Maori population and our fairly large Pacific Islander population.”

There is considerable poverty in remote rural communities, which are already afflicted by rheumatic fever and TB. For these and other reasons, Maori and Pacific Island people were seen to be more at risk from the spread of coronavirus.

The shadows left by history have influenced actions. During the Spanish flu pandemic of 1918-19, the death rate for indigenous Maoris was eight times higher than that of European descendants – a national scandal that still haunts New Zealand.

The public health authorities’ targeted interventions seem to be working now, with Maori and Pacific Islanders making up 27 per cent of New Zealand’s population but accounting for just 12 per cent of confirmed Covid-19 cases to date.

Closed borders, a national lockdown and social distancing have played their part. Some 1,000 people who arrived in New Zealand after the lockdown are being held in commandeered hotels, and monitored until they are shown not to have the virus. A highly efficient contact tracing system is also helping.

Like elsewhere, much of the country’s economy has ground to a halt, with a wage subsidy scheme announced that has within two weeks paid out NZ$6.6 billion (€3.63 billion) to more than a million workers.

Transparency is helping to avoid fraud by employers. The New Zealand government has created an online database, open to all, that will show exactly how much each company got and what they did with it.

So far, compliance by Kiwis has been high, with relatively few breaches reported. Just 16 people have so far been prosecuted. However, not everyone in authority has complied with the government’s own rules.

The country’s minister for health, Dr David Clark, had to apologise profusely after being spotted out mountain-biking in defiance of his own ministry’s plea for people to avoid such activities. He also had to admit driving his family 25km for a walk on a beach, breaching the “stay local” rules.

Clark’s offer to resign was refused by Ardern in the interests of continuity, but few doubt that his political career is effectively over.

The level of public confidence is striking, given that serious deficiencies were found in the public health system a few years ago by an inquiry into an outbreak of campylobacter in the water supply that infected 5,500 people and killed three.

Last November, he warned that a major global pandemic “is probably growing”. He co-authored an article last year in the international journal, Risk Analysis, arguing that New Zealand, Australia and Iceland could act as island refuges to save humanity from extinction in the event of a catastrophic pandemic.

On paper, Australia topped the list thanks to its “oversupply” of energy and food, but since the pandemic that the authors had imagined has suddenly become a reality, it is New Zealand that, in practice, has come out on top.

But McElnay does not see this as a reason for more billionaires to snap up “Armageddon” hideaways in New Zealand – a growing trend in recent years driven mostly by fear of climate change and the havoc it threatens.

“Covid-19 shows how quickly diseases like this can spread and havens might not be what you thought them to be,” she said.