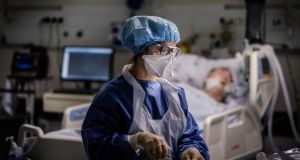 Emergency care doctors have expressed concern that the peak of the most critically ill coronavirus patients has yet to hit hospitals as existing intensive care units (ICUs) approach full capacity.

Medics have raised concerns about a surge of critically ill patients requiring intensive care this weekend and early next week, and a possible further peak later this month if members of the public did not adhere to social-distancing requirements over the Easter weekend.

Fears of rising public complacency about the virus were echoed by gardaí who are monitoring more than 1,000 locations in the State including forest walks and beaches in the run-up to the Easter holidays to ensure compliance.

Garda Deputy Commissioner John Twomey told The Irish Times that gardaí had noticed that people were “beginning to get tired” of the social-distancing regulations.

The warnings came as the State’s health emergency team said that a further 25 people had died from the virus – the second-highest number of deaths in the daily announcement.

There were 365 new cases of the disease confirmed on Wednesday, bringing total cases past the 6,000 mark for the first time, to 6,074 known cases in the Republic.

Disclosing more details on the deaths, the State’s chief medical officer Dr Tony Holohan told the Department of Health’s daily briefing that the median age of all those who had died was 81.

Dr Liam Woods, the Health Service Executive’s national director of acute hospital operations, confirmed that regular ICU units at three of Dublin’s biggest hospitals, Beaumont, Connolly and the Mater, were full but that they had “surge” capacity to use other beds created for critical care.

There were 132 empty ICU beds overall in the hospital system, he said, and a capacity to transfer patients to other hospital ICUs around and outside Dublin.

There were an “underlying” 312 ICU beds but “surge plans nationally” to bring that up to 812, though this was contingent on the training of nurses and on the availability of ventilators and oxygen.

Dr Emily O’Conor, president of the Irish Association of Emergency Medicine, said hospital ICU units in Dublin were “becoming stretched” and that staffing ICU-type beds in overflow areas created by hospitals to prepare for the pandemic was “going to become a problem”.

“We haven’t reached our capacity yet in our potential but definitely things are getting fuller,” said the emergency medicine consultant at Connolly hospital.

Dr O’Conor said there was no feeling within hospitals that a peak had been reached.

“There is still a fair bit of anxiety about managing this surge over this weekend and into next week,” she said.

Dr Michael O’Dwyer, head of anaesthesia and critical care at St Vincent’s University Hospital in Dublin, cautioned against any public complacency or relaxation by the public in social distancing.

“If they were to be relaxed by the assumption that we have reached a peak, it is perfectly plausible that we will see a further peak a week or two weeks down the line,” he said.

“That could be very difficult to deal with in intensive care that is largely close to capacity.”

Concerns were expressed too about the rising numbers of infection clusters or outbreaks at nursing homes and other residential facilities, which stand at 137, including 74 in the east, Dr Holohan said. There were only four clusters – defined as two or more cases – on March 21st.

Dr O’Conor said doctors were concerned that nursing homes may become “reliant” on hospitals due to the large number of sick patients in their care or inadequate staffing levels.

Tadhg Daly, chief executive of Nursing Home Ireland, said the rapid increase in clusters showed “nursing homes are effectively dealing with the surge that the hospitals were expecting”.

Coronavirus: Further six deaths reported along with 39 new cases 18:08
‘The pint man is back’: Belfast pub resumes delivery service after legal challenge 17:52
Woman loses damages claim over BreastCheck screening 17:09
Private hospitals ‘takeover’ by State will not be extended past June 16:52
Covid-19: Between six and 12 per childcare ‘pod’ when sector re-opens 16:25