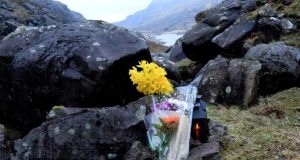 The scene of the pony and trap accident at the Gap of Dunloe, Kerry, where two tourists lost their lives. Photograph: Sally MacMonagle

Pony men who operate at the Gap of Dunloe in Co Kerry gathered with their families at Kate Kearney’s Cottage on Tuesday evening for a prayer service for two tourists killed there in a freak accident on Monday.

Pony men did not operate at the Gap of Dunloe on Tuesday as a mark of respect for Rosalyn Joy Few (64), a US citizen, and her Canadian partner Normand Larose (62), and they joined in a Decade of the Rosary with local priest Fr Paddy O’Donoghue.

The couple from Phoenix, Arizona, were fatally injured when they were thrown some 15ft into a rocky ravine near the Iron Bridge from a pony and trap as they travelled down the Gap of Dunloe.

The pony appeared to bolt, and the trap hit an embankment before the couple were catapulted from the carriage which, together with the horse, landed on top of the couple.

The man who was driving the pony and trap, a married man in his 40s from Kilgarvan, managed to jump from the trap and escaped uninjured. He was badly shaken, and was taken to University Hospital Kerry for treatment for shock before being discharged.

Ms Few and Mr Larose were holidaying in the Killarney area with Ms Few’s daughter and son-in-law and her grandchildren, who did not witness the incident but came upon the scene shortly after it happened as they travelled down the Gap of Dunloe in another pony and trap.

Ms Few’s daughter and her family were on Tuesday being comforted at their hotel in Killarney as they await the release of the bodies following postmortems, which are expected to take place on Wednesday at University Hospital Kerry in Tralee.

Garda Supt Flor Murphy of Killarney Garda station confirmed to The Irish Times that gardaí hoped to speak to the pony man over coming days as they seek to establish what exactly happened.

He said gardaí had appointed a family liaison officer to assist the family, and they were also working with officials at the US embassy to make arrangements with undertakers and airlines to repatriate the bodies.

“It’s a very sad tragedy for this poor family holidaying in Killarney. We don’t know why the horse and trap went off the road at that particular point, but all aspects will be looked at to try and find out what exactly happened and caused the accident,” he said.

Supt Murphy paid tribute to members of Kerry Mountain Rescue for their work in helping to retrieve the bodies in what were very difficult conditions.

“We decided to ask Kerry Mountain Rescue to help with the recovery of the two bodies – it was difficult to get down into the ravine, particularly given the weather conditions, and it was a very distressing scene but they showed great professionalism to assist us.”

Gerry Christie of Kerry Mountain Rescue told the Kerry Today programme on Radio Kerry that it had taken them an hour to retrieve the bodies as the ground was steep and slippery.

“This casts a huge cloud over things. It does cast a shadow in the Gap, but it casts a big shadow somewhere else in the world today.”

A spokesman for the pony-and-trap operators at the Gap of Dunloe, Paul Cremin, said everyone who worked there was deeply shocked, and their thoughts were with the family of the deceased couple.

“At this time for all involved we would like to extend our deepest condolences to the victims’ families...We are shocked and saddened at the events that unfolded, and we will do whatever we can to support the family and our injured colleague at this difficult time,” said Mr Cremin.