No role for officers ‘checking documents, goods, the back of white vans and so on’ 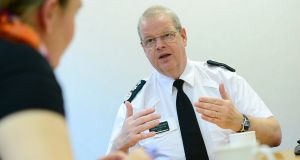 The police in Northern Ireland will not staff any form of Border security after Brexit, the PSNI Chief Constable has said.

“We will of course police the Border as normal. But if the underpinning assumption is that you will see armed officers effectively staffing checkpoints in various parts of the Border area, no,” said Simon Byrne.

“You’re not going to see lines of Land Rovers waving vehicles over with PSNI people checking documents, goods, the back of white vans and so on,” he said.

At a public meeting of the North’s Policing Board on Thurday, Mr Byrne told board members that he was “very clear, and has been very clear, with the Northern Ireland Office: that it will not be the role of the Police Service of Northern Ireland to staff any form of Border security.

“We’re clearly there to facilitate normality and day-to-day policing, but not to carry out cross-Border checks or the functions of other agencies,” he said.

Mr Byrne also said that he had taken legal advice to confirm the independence of his office.

He did “not expect to be either told to, or to have to staff . . . customs points or other checkpoints anywhere near the Border, because that’s not our responsibility; that’s something for the Border Force or Customs and Excise to do”.

Mr Byrne said that “whatever the narrative [on Brexit] is, there won’t be a stance from the PSNI that we’re policing differently in the Border areas. We will maintain business as usual.”

He also said he had briefed British prime minister Boris Johnson on the issues surrounding the Border during a half-hour video call last week.

Asked if he had sought legal advice because he was concerned the PSNI might be drawn into a developing security situation on or near the Border post-Brexit, he replied that it was sensible to seek advice given the “dynamic and fluid” situation.

“As we get nearer to 31 October, I thought it was prudent to reassure myself about my own responsibilities in detail, but also the bounds of any ask from the government to do something different,” he said.

Mr Byrne said any requests to protect other government agencies would be assessed on a “case by case” basis.

“If some of the developing [Brexit] plan is about some form of a warehouse where goods are checked, I think it would be unlikely you’d see the PSNI there,” he said. “But if there was a specific threat on a specific day, we’d have to respond appropriately – if there was a threat to a life or there was a crime taking place.”

He said that while the threat level in Northern Ireland remained severe, there is “no intelligence” to indicate an increased threat of either dissident republican or loyalist paramilitary violence in connection with Brexit.