Fintan O’Toole: Boris has destroyed what is left of UK’s credibility

British government has broken its own solemn legal and political commitments

British prime minister Boris Johnson has told MPs he has made a “genuine attempt to bridge the chasm” to strike a fresh Brexit deal with the EU with his proposals to replace the backstop. Video: UK Parliament 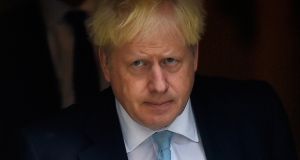 When Boris Johnson described his long-awaited proposals for changes to the Brexit withdrawal treaty as a compromise, he was not wrong. Two questions arise, however. What is being compromised? And who is Johnson compromising with?

The answer to the second is obvious: the proposals are a compromise, not with the EU, but with the DUP. And what is being compromised is the credibility of the UK as a partner in any international negotiations.

Though the EU and the Irish government are too polite to say so directly, Johnson’s plan destroys any remaining sense that the current regime in London is capable of sticking even to its own self-declared principles.

Ever since its victory in the referendum of June 2016, the Brexit project has been dogged by its inability to transcend its own origins. The referendum was always driven by the internal politics of the Conservative Party.

Its purpose, from the point of view of the man who called it, David Cameron, was to silence the increasingly turbulent anti-EU faction in his own party and see off the threat of Nigel Farage. And it has never been able to move on from being an internal negotiation to being an external one. The only thing that has really changed is that “internal” Tory politics came, after the 2017 election, to include the DUP.

And so here we are again. Political compromise is about two sides with different agendas meeting each other half way. It is easy to see why Johnson might be sincere in thinking he has achieved this – but only if the two sides are Johnson himself with his need to look like he is coming up with some vaguely credible alternative to the backstop and the DUP with its “blood red line” of Northern Ireland leaving the EU on exactly the same terms as the rest of the UK.

This week’s proposals do indeed represent a significant shift in this internal dynamic: both Johnson and the DUP now agree that Northern Ireland may in fact leave on different terms. It may (or may not) stay effectively within the EU single market for an indefinite number of four-year periods.

To that extent, we do not have to assume that Johnson is lying and that his proposals exist only to provoke the EU to reject them. We just have to assume that he is, like Cameron and Theresa May before him, so consumed with the internal politics of Brexit that he finds it impossible to think realistically about the real negotiations.

The problem, of course, is that the DUP – and its hardline supporters in the European Research Group faction of the Tories – are not Johnson’s real interlocuters on the actual process of Brexit. He is supposed to be convincing Brussels (and Dublin) that he has a better way of achieving what the backstop does, which is to guarantee that there will be no new Border-related infrastructure or checks on the island of Ireland. Instead, he has effectively resiled from the most basic commitments his government has made.

These commitments are not just rhetorical. They are legal. They are rooted in international law, which is what the Belfast Agreement is. But it is easy to forget that they are also in British law – ironically in the very act under which Brexit is supposed to be conducted.

What is ruled out is not just posts on the border but any infrastructure, any checks, and any controls that do not currently exist

Section 10(2)(b) of the European Union (Withdrawal) Act 2018 explicitly commits the UK not to “create or facilitate border arrangements between Northern Ireland and the Republic of Ireland after exit day which feature physical infrastructure, including border posts, or checks and controls, that did not exist before exit day and are not in accordance with an agreement between the United Kingdom and the EU”.

This could not be clearer: what is ruled out is not just posts on the border but any infrastructure, any checks, and any controls that do not currently exist.

This, remember, is not just an Irish or EU demand. It has been the official British line all throughout this process. The whole backstop problem arises, not as some kind of dastardly Irish or European plot, but because Britain just can’t live up to this commitment if Northern Ireland leaves either the single market or the customs union.

This is the tyranny of fact: there is nowhere in the world where two different customs and/or market regimes have a frontier across which trade flows without checks, controls and infrastructure. But all the energy among the Brexiteers has gone into trying to escape this inescapable reality.

Ever since May’s right-hand woman Fiona Hill issued instructions to Whitehall to “spaff some money on some geeks” they have been in search of a magical technology that make the facts on the ground disappear. And ever since it became clear that this technology does not exist, the internal project has been what Whitehall officials privately call “keeping the corpse warm”.

The corpse is now cold. Johnson’s proposals acknowledge that even if all the magical technology works, there will still be checks, controls and (implicitly) infrastructure. The British government has broken its own solemn legal and political commitments. Faced with a choice between compromising with reality and fatally comprising trust, Johnson has chosen the second option.