Police in Malaysia set up hotline for missing Nóra Quoirin 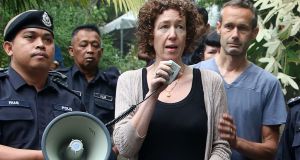 Police in Malaysia yesterday announced that a hotline had been set up in an attempt to get more information from the public in the search for Irish teenager Nóra Quoirin, who went missing from a holiday resort on August 4th.

Negeri Sembilan police chief Mohamad Mat Yusop confirmed, meanwhile, that there had been talk of a reward being offered for information about the schoolgirl’s whereabouts, but would give no further details.

Yesterday he said that, in the 10 years since the Dusun resort was established, there had never been another case of a missing person at the resort which is located about 63km south of the Malaysian capital, Kuala Lumpur.

He told reporters on Saturday that police were very worried about Nóra’s welfare. “We do not know how long she can survive,” he said.

On Sunday, Muslims celebrated Hari Raya Aidiladha and, before the start of the search operation, Muslim members of the search and rescue team said special Aidiladha prayers. Monday is also a national holiday in Malaysia.

The Irish pop group Westlife and the popular Malaysian actress Fasha Sandha made personal appeals, calling for every assistance in the search for the vulnerable teenager.

The Malaysian Insight reported that, at sunrise yesterday, members of the search and rescue team, including the Nilai district police chief, Mohd Nor Marzukee Besar, joined about 500 local people at the Kariah Pantai Mosque in Seremban, where about 300 people offered special prayers on Friday.

On Sunday, Tanuku Ali Redhauddin ibni Tuanku Muhriz, the son of the king of Negeri Sembilan, came to the search site with food gifts for Hari Raya Aidiladha. More than 350 packages were distributed to the search and rescue personnel.

The search and rescue teams on Sunday scoured a narrowed-down area close to the Dusun resort and rechecked places already examined. Heavy rain made conditions particularly difficult for those searching in the rainforest.

Nóra’s father, Sebastien, who is French, raised the alarm on the morning of August 4th when he discovered his daughter was not in the bedroom she was sharing with her younger siblings. The family had checked in to the resort the previous day, intending to stay for a two-week holiday.

On Saturday, Nóra’s mother, Meabh, who is from Belfast, thanked search and rescue teams for all they had done to try to locate her daughter.

Being comforted by her husband while she spoke, and clearly struggling with her emotions, she said: “We want to say thank you to each and every one of you. We know you are searching night and day for Nóra.

“We see you working so hard and also praying with us, being with us. We know you have given up your time, especially at a special festival time, to be with us here. It means the world to us and we are so grateful for everything that you are doing for us, everyone here and everyone who is helping who is not here.

“We are extremely impressed with the effort, your expertise, your dedication and we hope you find Nóra, and thank you so much. Terima kasih [thank you].”

This was the first time that Nóra’s mother had spoken publicly about her daughter’s disappearance. The Lucie Blackman Trust, which supports British nationals in crisis overseas, has been helping the Quoirins to deal with the media.

Nóra’s family has believed since the day she disappeared that their daughter was abducted. For police, the case has officially remained that of a missing person. They said there was no evidence of foul play, but added that they were ruling nothing out.

Mohamad Mat Yusop said on Saturday the search area had been reduced from a 6km to a 4km radius. However, more personnel were drafted in, including members of the elite 69 Commando unit of the Royal Malaysian Police.

Among those involved in the search yesterday were expert indigenous trackers from the Senoi Praaq special unit.

To aid in the search for Nóra, a recording of her mother’s voice has been played via loudhailers in the rainforest.

1 Sentence for attempted murder by teen in Dun Laoghaire too lenient, court finds
2 Michelle O’Neill will not step aside ‘under any circumstances’ despite calls from other parties after Storey funeral
3 Pygmalion pub mired in weekend social distancing row
4 World, look away now – these are dark days for the United States
5 Ghislaine Maxwell arrested on charges of helping to lure girls for Jeffrey Epstein
Real news has value SUBSCRIBE