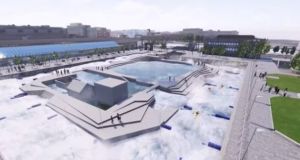 The proposed white water rafting facility would be located between the IFSC and the CHQ building in Dublin. Image: Smart Docklands/ YouTube

Dublin City Council (DCC) is seeking to draw up a shortlist of contractors interested in building a controversial white water rafting facility in George’s Dock.

Dublin city councillors voted in December 2019 to approve plans to build a white water rapids rafting facility beside the CHQ building in Dublin city centre, at a cost of €23 million.

On Friday, the local authority sought expressions of interest from prospective construction companies for the contract to build the facility.

The preliminary contract tender, published online, said the project was “subject to funding”. The tender listed the estimated value of the contract as €25m excluding Vat, which would represent a further increase in the cost of the project.

When the proposed rafting facility was first mooted the council said it would cost an estimated €12m, which was later revised to €23m following changes to the plans.

Councillors were previously told funding for the new facility would come from €13m in grants mainly from the Government, €4m from council reserves, and nearly €5m from development levies.

The contract tender said the facility would compromise a white water rafting course, swift water rescue training centre, and a kayaking and canoe polo pool. The construction works would take an estimated 18 months to complete, it said.

The local authority said it was seeking expressions of interest from six companies for the construction contract. If the project secures sufficient funding the companies will then submit bids for the contract.

In a Twitter post on Friday, former Fine Gael TD Noel Rock described the project as an “expensive gimmick”.

“Mother of God. How is this still proceeding? Who is funding it? DCC said it was dependent on Government funding which, last I checked, wasn’t confirmed - and frankly never should be,” he said.

Previously the local authority had promised to drop separate claims it was owed about €12m by the Department of Housing from the wind-up for the Dublin Docklands Development Authority, in return for grant assistance for the rafting project.