Varadkar: €292,000 salary for top health job likely to lead to others seeking parity 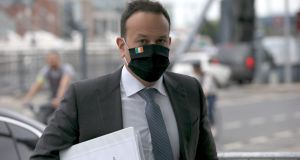 Tánaiste Leo Varadkar: ‘The Cabinet signed off on temporary appointment of Robert Watt as interim secretary general. He is there on his existing salary.’ Photograph: Stephen Collins/Collins Photos

The Government’s decision to sanction a pay rise of €90,000 per year for the post of secretary general of the Department of Health will no doubt lead to knock-on claims by others for parity, Tánaiste Leo Varadkar has said.

However he suggested the Cabinet would likely reject any such attempts made in relation to other top Civil Service posts.

Separately the Department of Public Expenditure and Reform said on Friday that its former secretary general Robert Watt had no input into the decision of its Minister Michael McGrath to sanction a €292,000 salary to apply to the top official post in the Department of Health.

It has not been confirmed yet whether Mr Watt will be a candidate for the substantive post in the forthcoming open competition for the role of secretary general of the Department of Health.

In the meantime Mr Watt is continuing to receive his Department of Public Expenditure salary of about €211,000.

Speaking on Friday Mr Varadkar said: “The Cabinet signed off on temporary appointment of Robert Watt as interim secretary general. He is there on his existing salary. The party leaders with the secretary general of the Government agreed that that position would be advertised and there would be a higher salary level to attract the best candidates for the job. “

“The person who will get that job will by no means be the best paid person in the health service or in the public service. We do think it’s such an important service and also when it comes to Sláintecare it should carry that salary.”

He said he had no doubt it would have a knock-on effect and other senior public servants may be looking for parity but the Government would usually say “no”.

The new salary rate would make the new secretary general of the Department of Health the highest paid person in the Civil Service, although there are a number of individuals paid more in the broader public service, including HSE chief executive Paul Reid.

On Friday evening the Department of Public Expenditure said its Minister had responsibility under legislation for setting the terms and conditions of civil servants.

It said the role was considered to be highly complex with a challenging brief given the current pandemic, that the sector employed over 125,000 staff and the need to implement the Government’s overall reform plans.

It said a salary of €292,000 was considered “commensurate with the scale of these responsibilities and the unique challenges attached to this role, not least at the current time”.

“In the context of the above, the Minister (for Public Expenditure) engaged with the Taoiseach, the Minister for Health and the secretary general to the Government. On January 6th, Cabinet was informed that the Top Level Appointment Commission (TLAC) process for the position in Health was about to commence and that, for the reasons outlined above, it would attract improved terms and conditions reflecting the responsibilities of the post. Mr Watt had no input into the sanctioning by the Minister for Public Expenditure and Reform of the terms and conditions of the competition.”