Dublin City Council says it has ‘significant concerns’ about proposal 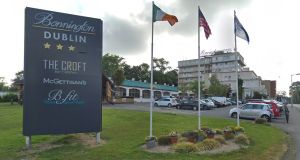 The owners of the former Regency Hotel, now the Bonnington, in Whitehall, Dublin, have been ordered to reassess their plans to build a seven-storey ‘room only’ hotel on the grounds. Image: Google Maps

The owners of the former Regency Hotel, now the Bonnington, in Whitehall, Dublin, have been ordered to reassess their plans to build an additional seven-storey “room only” hotel within its grounds.

Liffeyfield Limited, part of the McGettigan hotel group, wants to demolish the existing low-rise convenience store in front of the hotel on the Swords Road and replace it with a 234-bedroom budget hotel with 142 car-parking spaces.

However, Dublin City Council said it had “significant concerns” about the proposal, particularly the relationship between the new limited service hotel and the existing hotel behind it.

The Regency hotel made headlines in February 2016 when Kinahan crime gang associate David Byrne was shot dead by gunmen from the rival Hutch gang. The hotel was renamed the Bonnington in October 2017.

The owners intend to retain the old hotel, which was originally built in the early 19th century, but was heavily altered over the course of the 20th century, and build the new hotel in front of it. The new hotel would not include any restaurants, bars or leisure facilities.

More than 40 objections have been lodged with the council against the development, mostly referencing concerns over its height and the potential for increased traffic on the Swords Road.

The council is taking enforcement proceedings against the hoteliers for three breaches of the planning acts, and has previously taken enforcement action in relation to 29 breaches, which have since been resolved.

Social Democrats TD Róisín Shortall, who represents the area, said the applicant had a “very poor record of planning compliance” and the “mass, height and bulk” of the proposed hotel would represent an overdevelopment of the site and would overshadow surrounding houses.

The council said the proposed hotel would result in an 80 per cent increase in bedrooms on the site. It noted that when the proposal was presented at preplanning stage it was for an extension to the existing hotel, with a new single shared reception and direct connections between the existing and proposed building on all floors. “This appears to be a co-located hotel, rather than an extension of the existing” hotel it said.

The council said it had “significant concerns regarding the lack of physical integration and internal connectivity between the proposed room-only hotel, and the existing full-service hotel on site, and the resulting potential for late night noise, nuisance, and disturbance”.

It also raised concerns about what it says is a “ shortfall” in parking provision to serve the existing and proposed hotels “which would generate excessive levels of overspill parking on to adjoining residential streets and obstruct other road users”.

The hoteliers have been six months to make an amended submission to the council.