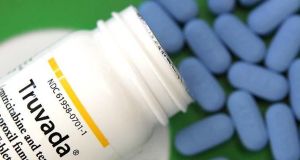 Pharmaceutical giant Gilead, which manufactures the HIV anti-retroviral drug Truvada, has withdrawn its appeal against the High Court’s refusal to grant an injunction against generic manufacturers.

Gilead has generated almost $14 billion globally in recent years from sales of Truvada, which is used as a pill (pre-exposure prophylaxis – PrEP) to help prevent the contraction of HIV.

PrEP was made available for purchase in Ireland earlier this month along with a generic version of the medication.

Some studies have shown that taking a PrEP drug as a preventative measure reduces contraction rates among men who have sex with men by 90 per cent.

Gilead came off patent in July, but its Irish exclusivity is extended until 2020 by a supplementary protection certificate (SPC).

In July, Gilead initiated High Court action against generics manufacturers Mylan and Teva, who planned to launch generic versions in Ireland upon patent expiry. Gilead sought an injunction blocking them due to the SPC. The court rejected its application for a provisional injunction which would have blocked Mylan and Teva until a full trial.

Gilead has confirmed to the Court of Appeal that it has withdrawn its appeal of the High Court’s decision.

“Lower prices means greater access for patients, we had heard anecdotally of patients sharing medicine and not really sticking to the regime,” Mr Delaney said.

“We hope that this will also decrease the illegal purchasing of medicine in Ireland. There are a number of websites in Ireland and the UK that offer this medicine, whether that’s a genuine source or not, people go to these websites and purchase the product for a certain price and I think to some extent can be taking a bit of a chance.”

“Mylan welcomes the withdrawal of Gilead’s appeal of the decision to refuse a preliminary action as it is set to both increase patient access to this important medicine and decrease the estimated €24 million the Health Service Executive spends on Truvada,” a statement from the pharmaceutical company said.

The HSE has said an assessment is taking place on whether it would be cost effective for it to cover the cost of PrEP.

More than 500 new cases of HIV were diagnosed in Ireland last year. Rates have been rising steadily since 2011, with the rate of new infections increasing significantly within the past two years.

Nearly half of the new HIV cases resulted from sex between men. Nearly a fifth came after heterosexual sex. Just four per cent of cases are reported from people who inject drugs.