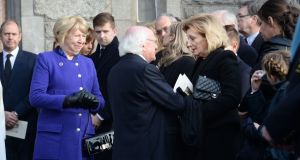 President Micheal D Higgins and his wife, Sabina, sympathising with Peter Sutherland’s wife, Maruja, at his funeral in the Church of the Sacred Heart, Donnybrook. Photograph: Cyril Byrne 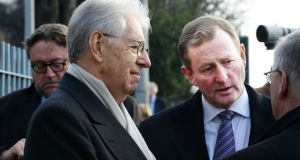 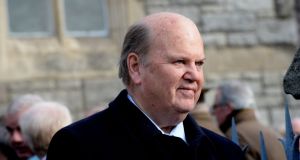 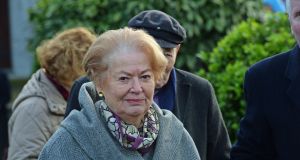 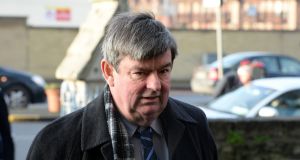 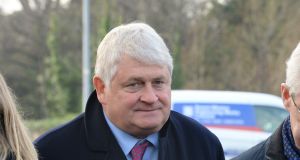 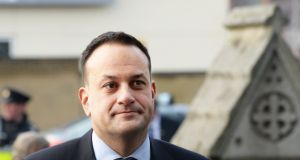 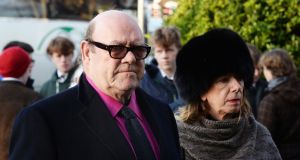 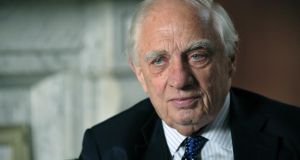 The great, broad sweep of Peter Sutherland’s life, loves and many achievements were represented in abundance on Thursday at his packed funeral service at the Church of the Sacred Heart in Donnybrook, Dublin.

Close to 2,000 people from the many walks of life in which he excelled came to pay respects to a man whose achievements as an Irishman on the world stage most present regarded as without equal. They came from the worlds of law and politics, from the European Union and from business, from his early days as a schoolboy and later times when friendships were forged and tested on the rugby field.

And they came from the church, extolled as the bedrock moral compass that guided him throughout his life.

Mourners heard a special message of sympathy and condolences from Pope Francis.

“With deep appreciation for Mr Sutherland’s dedication and his assistance to the church and to the Holy See, and mindful of his many years of generous service to the international community, especially in the support of migrants, his Holiness entrusts his soul to the merciful love of Our Heavenly Father,” it said.

“He promoted globalisation because he saw it as a means of lifting billions out of grim poverty and of countering a narrow nationalism which avoids global responsibility. True, his enthusiasm for the real benefits of globalisation may indeed have blurred his view of its downside but he rightly emphasised its benefit for the poorer countries of the world,” he added.

Fr Barber said that writ large over all Mr Sutherland’s success was the role of his wife, Maruja.

She brought “balance and calm” to their marriage and “of course, his long illness showed her in her finest colours”.

Mr Sutherland practised his faith and this gave him his moral compass, said Fr Barber, and the essence of greatness in him was to be found in the Gospel.

“One never finds greatness in gaining credit of a great name on earth but in conforming one’s life to that of Christ,” said the priest. “If one achieves that, then one is great, no matter how your life is otherwise and this was something of which Peter Sutherland was quietly convinced and that he accepted in faith.”

The Government was represented by the Taoiseach, Leo Varadkar.

The former leader of the SDLP and former MP for Belfast South, Alasdair McDonnell, was present.

Several figures associated with the EU and European politics were also there. They included Ireland’s EU commissioner, Phil Hogan; former prime minister of Italy Mario Monti; David O’Sullivan, the EU ambassador to the US and long-standing EU official; and Noel Dorr, former secretary-general of the Department of Foreign Affairs and the current incumbent, Niall Burgess.

In his eulogy, Garrett Sheehan spoke of Mr Sutherland’s love of his wife and of their great pride in their children, Shane, Ian and Natalia, and their 10 grandchildren. Mr Sutherland had a big heart that “was always going out to others and it just seemed to get bigger as the years went by”.

He was a proud Irishman and a proud European and an internationalist “in the very best sense of that word”, said Mr Sheehan.

He found “his truest and most complete voice” in working in the cause of international migrants, the deployment of a gift “he knew had been given to him to be used in the service of others”, said Mr Sheehan.

“In a sense, he no longer belonged to himself. He was constantly searching for new ways to promote the cause of migrants, calling always on us Europeans to try and do that bit more and always backing his arguments with the appropriate evidence. This is what he was called to do and he responded generously and fully until that fateful Sunday morning in September 2016 when he collapsed on a London pavement.”

As Mr Sutherland’s coffin was carried shoulder-high from the church by pallbearers led by his two sons, a guard of honour was provided by UCD and Lansdowne rugby clubs.

He was buried at Kilternan Cemetery Park.

1 Coronavirus: A further 123 cases reported in meat processing plants over past week
2 Madeleine McCann case: Police identify German prisoner as suspect
3 Luke ‘Ming’ Flanagan bares his bottom half to European Parliament
4 Mother of three (41) who had to fundraise for her own cancer treatment has died
5 Tyrone midwife on the cover of Vogue magazine
Real news has value SUBSCRIBE