Doctors accuse Taoiseach of ‘shocking ignorance’ about the health service 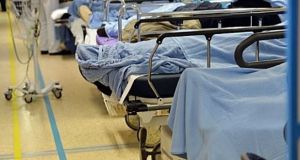 The INMO said there were 483 patients awaiting admission to a hospital bed on trolleys on Friday, down from nearly 600 on Thursday, and a record 677 on Wednesday

There were more than 2,400 patients on trolleys waiting for a hospital bed at some stage since the start of the new year, nurses have said.

While the number of people waiting for a hospital bed on trolleys in emergency departments or on wards fell to 483 on Friday, the Irish Nurses and Midwives Organisation (INMO) said the overall number recorded in the opening days of January was up 10 per cent on the same period last year.

The number of patients deemed by doctors to require admission who were waiting for a hospital bed reached a record level of 677 on Wednesday.

Speaking after a meeting with the HSE on Friday, the INMO said the emergency department task force would meet on Monday

Doctors, meanwhile, have strongly criticised Taoiseach Leo Varadkar over what they described as his “shocking ignorance” of the health service, and the impact years of austerity have had on it.

As the number of people waiting on trolleys and wards for a hospital bed fell below 500 on Friday, the Irish Medical Organisation (IMO) said it was exasperated at comments by Mr Varadkar about the current overcrowding crisis.

Mr Varadkar on Thursday apologised to patients who had experienced long delays and waits on trolleys in emergency departments over recent days. During a visit to Hungary, the Taoiseach expressed regret and frustration at the situation, and over the fact that there has not been an improvement despite increased investment over the last three years.

IMO president Dr Ann Hogan said Mr Varadkar’s comments “reflected a shocking ignorance of the health services and the impact of years of austerity which was particularly worrying given the Taoiseach is a former minister for health”.

“At every budget for the past five years we have warned that the supposed ‘increases’ in the health budgets were mirages, and they would not even keep pace with the underlying cost increases in the services.

“Any increases in the health budget hardly maintain existing levels of services let alone deal with the projected demand based on known demographics and the increase in the elderly population who have complex healthcare requirements.

“We thought that successive Ministers were trying to fool the public...now it seems that they fooled themselves as well.”

The INMO said there were 483 patients awaiting admission to a hospital bed on trolleys in emergency departments or on wards on Friday, down from nearly 600 on Thursday, and a record 677 on Wednesday.

There were 43 patients deemed to require admission by doctors waiting for a bed at University Hospital Limerick on Friday, with 34 patients waiting at St Luke’s Hospital in Kilkenny, and 33 at the Midland Regional Hospital in Mullingar.

In Dublin, the largest number of patients waiting for a hospital bed was at St Vincent’s University Hospital, where 29 patients were on trolleys.

Dr Hogan said it was “a shameful indictment of the political system” that the Taoiseach promised on Thursday that the situation in the hospital system would stabilise soon.

She said that Mr Varadkar’s “version of stability involves a 92 per cent bed occupancy on average, 500-plus patients waiting for admission on trolleys, almost 700,000 patients waiting for an outpatient appointment, an ever-increasing number of cancelled operations and procedures, and a general practice system which is struggling to meet demand and is near to collapse. Is that what is acceptable to the Taoiseach as stability?”

Dr Hogan said the Taoiseach and his Government “must publicly commit to funding and investing in our health services so that we can finally move away from the current pattern of crisis to chaos and back again”.

She argued that austerity was the root cause of the hospital crisis, and that “significant and urgent” investment” was the only response.