People who fail to self-isolate should be fined for their ‘selfish behaviour’, says GP 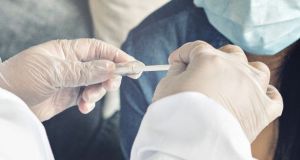 Dr Illona Duffy said many people in Monaghan have to wait five days between being tested and getting the results and they are not self-isolating.

A GP has suggested there should be fines for people who refuse to self-isolate if testing positive for Covid-19 or who are waiting for the results of a Covid-19 test.

Monaghan town-based GP Dr Illona Duffy said there is enough information in the public domain for people to know the importance of self-isolating, but many are refusing to do so.

She was aware of a business in Monaghan town which had to close its doors on Friday evening because a person involved with it had not self-isolated.

Dr Duffy suggested the fines could be similar to those imposed in the North where some people have been forced to pay £1,000 (€,1,100) for not self-isolating while they were infected.

“There should be fines for deliberately breaking the rules,” she said.

“When we are advising people to self-isolate, we find they are not doing it. I rang somebody with their test results yesterday to tell them they were positive only to find they were not at home.

“More people were ringing me this afternoon and evening upset. They’ve been exposed to Covid because people who were advised to isolate because they were close contacts of a positive case did not do so. This is selfish behaviour. This is dangerous behaviour.”

Dr Duffy said many people in Monaghan have to wait five days between being tested and getting the results and they are not self-isolating.

“ The young people are just not staying at home. They just don’t get it. We are struggling to get the message across as to why they have to self-isolate.”

She said many are puzzled that somebody who is a positive case self-isolates for 10 days while their close contacts have to do so for 14 days.

“We are trying to wait and see if they become infectious either symptomatically or asymptomatically. The message still isn’t getting through. People in their twenties are not doing what they are supposed to be doing and it is really worrying.”

She was aware of one person who had tested positive and turned up at the home of a very elderly person.

Dr Duffy said her surgery did not have a single Covid-19 positive case for weeks, but she has had seven this week.

“That’s seven in one practice and I am aware of colleagues who have multiples too and we are getting calls from people who are close contacts. This is how it mushrooms and spreads out of control. It is too disappointing that people will ignore the advice they are being given.”

Monaghan has seen a considerable spike in recent days with 30 new cases notified on Thursday although its 14 day average up to last Monday was 61.7 cases per 100,000, lower than the national average of 70.7 per 100,000 cases.