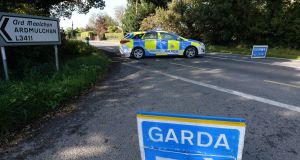 The road was closed near the scene of the tragedy pending technical examination. Photograph: Seamus Farrelly

The 29-year-old Moldovan whose body was discovered at a roadside in Meath in the early hours of Saturday morning was due to be married in the coming weeks.

Staff at a Meath takeaway have expressed their shock and devastation at the death of their popular colleague whose remains were discovered close to an electric scooter at Harmanstown on the N51 Navan to Slane Road at 2.50am.

The young man was living in a house close to where he was found and had only moved to Ireland in the last three months.

He was due to get married to his fiancée who is living in Moldova in the coming few weeks.

Staff at Romayo’s Takeaway Restaurant on the Collon Road in Slane expressed their horror at the tragedy.

“He was a very popular young man and was working here on Friday. He was only in the country a few months,” said a co-worker who did not wish to be named.

“We are all shocked and just devastated that he is gone. No-one knows what happened.”

Local businessman David Smyth, who owns the building where Romayo’s is situated, visited the scene on Saturday morning and said the deceased was hugely liked by all who met him.

“He had only been in Ireland a few months and was due to get married to his fiancée who is back in Moldova in about three weeks time,” he said.

“I visited the scene in the early hours of Saturday morning after the accident. The deceased had lights on his scooter and was wearing a helmet and a high viz jacket.”

He said the man was “only here a short time but had already made a lot of friends in the area and was well liked by all who came across him”.

“He was hugely popular among the staff in Romayos and my heart goes out to them and his loved ones at this time.”

“He was a member of a team of hard-working staff in a very popular and busy takeaway.”

In a statement on Saturday morning, gardaí said they had attended the scene at about 2.50am following reports of an unconscious man lying on the road.

The man who was travelling on an electric scooter from the direction of Slane, was treated by ambulance services but was later pronounced dead, the statement said.

The road was closed pending a technical examination and local diversions were put in place.

“At this time, gardaí are treating this incident as a possible road traffic collision and have appealed for witnesses to contact them,” the statement said.

Anyone who travelled along the Navan-Slane road between 2-3am and who may have dashcam footage should contact the incident room at Navan Garda station on 046 907 9930 or the Garda Confidential line on 1800 666 111.