Pen and paper used to record vaccines as IT system not in place yet, Dáil told

Some 1,500 doctors, nurses and other staff not deployed after Call for Ireland initiative 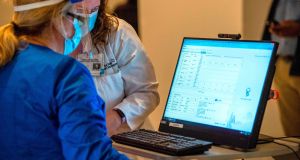 Healthcare workers at a computer terminal as they administer a vaccine to people in Connecticut in the United States last week. Photograph:Joseph Prezioso/AFP/Getty

Vaccine roll-out in nursing homes is being recorded with pen and paper as the IT system to deal with the inoculation programme is not in place, the Dáil has been told.

Independent TD Cathal Berry said this was a real difficulty for the roll-out of the vaccine which he described as “sluggish”.

Dr Berry, who is a medical doctor, expressed concern that the IT system “does not work at all” and added if a person goes to a nursing home and opens their laptop they “cannot input any data from a vaccine perspective at all, which is a major problem”.

He said “in effect, we are combining 21st century cutting-edge vaccine medicine with a 13th century means of recording it, which is simply a pencil and paper”.

Tánaiste Leo Varadkar acknowledged that vaccinating in nursing homes and in healthcare settings was “a pen and paper exercise at the moment”.

He said an information technology (IT) system had been delivered to the HSE at the end of December. “Additional functionality is being added but it is not needed yet,” he said.

“ Anyway, we will very much need the IT system when we go out to the GPs and pharmacies. I am told that we will be ready for when it is required, which is, most likely, next month sometime.”

Mr Varadkar also told the Kildare TD that currently about 50,000 vaccinations were being done weekly but would reach well over 100,000 in February once the AstraZeneca vaccine becomes available.

The Tánaiste also acknowledged that he was unaware of the serious delays in processing atypical working visa applications in his department for overseas healthcare workers, he told the Dáil.

Mr Varadkar said he would discuss the issue with his secretary general after Sinn Féin finance spokesman Pearse Doherty said visa processing that previously took two days was now taking up to three months and preventing the recruitment of healthcare staff, the Tánaiste said.

“If it wasn’t for the department dragging their heels we could have 200 additional nurses in Ireland by the end of the month,” Mr Doherty said.

With 7,000 frontline healthcare staff out sick and hospital systems under major strain to cope with the massive surge in Covid-19 cases Mr Doherty said hospital ICU capacity was expected to be used up by the weekend.

He said the failure to build additional capacity left the State reliant on surge capacity and 30 per cent of private hospitals.

But the Tánaiste said the State could have access to 60 per cent of private beds. They had secured 30 per cent and can ask for and were negotiating an additional 30 per cent.

Hitting out at the lack of action on recruiting staff, Mr Doherty said there is a pool of 1,500 doctors, nurses and other staff, many of them “job ready”, under the Be on Call for Ireland initiative, who were willing to take up work but who have not yet been deployed, he said.

The Donegal TD said the RCSI had to cancel 200 exams for nurses due to the delay in processing the visa applications.

The Tánaiste told him that he had not been informed of the delays in visa processing. It had not been brought to his attention by the HSE or by the Minister for Health.

He said he would investigate the issue but stressed that visa applications had to be processed properly.

Mr Varadkar added that there had been a significant level of interest in the Be On Call for Ireland initiative but many people were not available, others were already working in the health service and some did not have appropriate qualifications. But he would raise the matter again with the Minister for Health.

On hospital capacity, Mr Varadkar said “we may see the total number of people being admitted to hospital fall in about a week’s time” and the numbers in ICU dropping in two weeks.

However “hospitals will be in a very difficult, very precarious and very dangerous situation for the next two weeks”.

Mr Varadkar said their contribution needed to be properly recognised, “perhaps through some form of honorarium. I have not worked that out exactly yet, but it would be right and appropriate that we do so.”