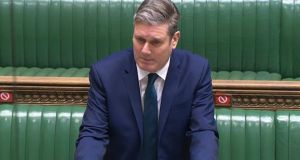 Labour leader Keir Starmer was human rights adviser to the Policing Board in Northern Ireland from 2003 to 2008. Photograph: House of Commons/PA Wire

The British Labour party has begun an education programme on the Belfast Agreement, highlighting the role of women and trade unions in the peace process.

The programme, which was developed with political scientist Jon Tonge and the Labour Party Irish Society will use webinars and other online resources to tell the story of the peace process and the role of key figures in both communities.

Labour leader Keir Starmer, who was human rights adviser to the Policing Board in Northern Ireland from 2003 to 2008, said he also wanted to highlight his party’s role in negotiating the Belfast Agreement.

“Working in Northern Ireland in the decade after the Belfast/Good Friday Agreement, I saw first-hand the transformation that peace helped bring about. The Belfast/Good Friday Agreement is personal to me, and it is personal to the Labour Party. But it must never be taken for granted. That’s why I am incredibly proud we are launching this unique programme for members across the country which will tell the story of peace, Labour’s proud role in it, and why the work to deliver the promise of peace goes on,” he said.

The programme will include four webinars outlining the path to peace, looking at the role of women and trade unions, hearing from people who have grown up in the North since the Agreement, and reviewing the unfinished business of the peace process.

“Alongside the NHS, the Equal Pay Act and the National Minimum Wage, the Belfast/Good Friday Agreement is one of our proudest achievements. It is Labour’s responsibility, inside and outside of office to safeguard the agreement and build understanding of it. That’s why we a launching this programme which shows, twenty-three years on from Good Friday, our commitment to the political settlement is steadfast and unshakeable,” she said.