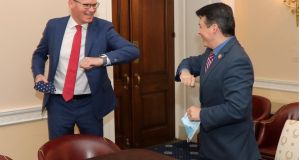 Senior Democrat Richard Neal has reiterated his warning that a trade deal between Britain and the United States will not happen if the Belfast Agreement is undermined.

Speaking following a meeting with Minister for Foreign Affairs Simon Coveney and House Speaker Nancy Pelosi in the US capitol on Wednesday, Mr Neal said that Ms Pelosi had reinforced her position on Brexit.

“She reinforced her position so that there is not any confusion - anything that could jeopardise the Good Friday Agreement would mean that there could be no free trade agreement on a bilateral basis between the UK and the US,” he said.

Mr Coveney met with Mr Neal and Ms Pelosi, for an hour-long meeting at her Capitol Hill office, shortly after she met with Treasury Secretary Steve Mnuchin on a contentious Covid relief package which is dominating political activity on the Hill this week.

As Brexit negotiations enter a crucial period, and the European Council meets later this week, Mr Neal said he would be watching the negotiations closely.

The senior Democrat dismissed the possibility of a US-UK trade deal being considered by the Ways and Means committee he chairs this year, even in the so-called ‘lame duck’ session between November’s election and the sitting of the new Congress in January.

“I keep trying to remind people, particularly in the UK government, what this was like in the run up to the Good Friday Agreement . . . every side had to compromise,” he said.

Mr Coveney, who concluded his three-day visit to Washington on Wednesday, said that he struck a tone of optimism during his meeting with the House Speaker.

“I think a trade deal is doable before the end of the year. The full implementation of the protocol is also very doable. We need to focus perhaps less on the internal market bill and all that flows from that - which has led to an undermining of trust and an increase in tensions around these negotiations – and more on negotiating solutions to the outstanding issues.”

Speaking following his meeting with Mr Coveney, Congressman Brendan Boyle said he was very concerned by the British Government’s decision to introduce the Internal Markets Bill. He also added that Northern Ireland was an issue that interested both political parties in the US.