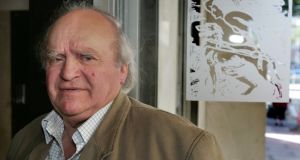 Peadar Lamb who died on Friday at the age of 87 appeared in hundreds of theatrical productions. File photograph: Matt Kavanagh

Peadar Lamb was from Carraroe and of Connemara, and those places never left him, mourners heard at the funeral of the actor on Monday.

Lamb, who died on Friday at the age of 87, appeared in hundreds of theatrical productions, including many on the Abbey stage, as well as numerous films and TV dramas over the course of a long and illustrious career.

During funeral Mass at Our Lady of Victories Church in Sallynoggin, he was remembered warmly as a performer, husband, father and grandfather.

“We remember him as an actor, but was far, far more than that,” said Fr Pádraig Gleeson, who celebrated the Mass, and described Lamb as “a man who has given so much to the country and its people.”

The actor Geraldine Plunkett, to whom Lamb was married for 52 years, thanked the medical staff who had cared for her husband during his final illness, quoting Maurya in JM Synge’s Riders to the Sea: “No man at all can be living forever”.

Speaking on behalf of the family, Peadar Lamb jr recalled that, from an early age, all the children had been brought to the theatre and encouraged to talk around the dinner table about literature and performance.

His father brought the same qualities to his work teaching young actors at the Abbey School of Acting, Peadar Lamb jr said.

Peadar’s own father, Charles Lamb, was an artist, and Peadar had decided that painting was too uncertain a profession. “So he decided not to be a painter but get involved in acting instead,” said Peadar jr to considerable laughter from the many theatre people present.

Music during the service was provided by singer Liam Ó Maonlaí, with whistle and uileann pipe by Tristan Rosenstock and Eamon Galldubh. Susie Lamb, Peadar’s daughter, sang the closing hymn, Caoineadh na dTrí Mhuire, while his son, Breifne, read Francis Ledwidge’s poem To One Dead. There were also readings by his other children Marcus, Katharine and Michael.

Following the service, Lamb was buried in Deansgrange Cemetery in Dublin.