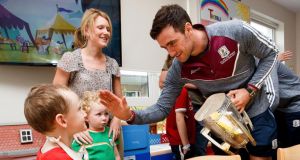 The morning after the night before for the All-Ireland champions always involves a visit to Our Lady’s Children’s Hospital, in Crumlin in Dublin. It is a visit most are happy to make even if it means being roused from a bed you hardly got into.

It was Galway’s turn on Monday after a 29-year wait – and the novelty of having new All-Ireland hurling champions, having grown used to Kilkenny and Tipperary over the past few years, was not lost on the staff, patients or parents at the hospital, whose reception area was a sea of maroon and white.

Claire Creggy, whose son Iarla was born 11 weeks ago at the Coombe Women & Infants University Hospital with a cleft palate and talipes, or club foot – she expects him to be fine – fought back tears as she recalled her county’s long wait for the Liam MacCarthy cup.

As a child she was livid at not being able to attend the 1988 final, the last time Galway won the men’s All-Ireland Senior Hurling Championship.

“From that day forward I went to every game, and it has taken this long for the team to actually get their reward,” she said. “It’s not just for the guys yesterday: it’s for all the guys who went before them.”

Ciara Adams-Kelly gave up teaching at Gort Community School to look after her severely disabled five-year-old son, Alastair, who is a regular patient at Crumlin. She taught three of the players who won medals on Sunday: Jonathan Glynn, Conor Cooney and Adrian Tuohy.

“It was my previous life. I’m just cringing. They are going to say, ‘Hello, Miss’,” she said as she waited for the bus to arrive.

Men of the moment

The Galway bus arrived not long after 10am. It was a minibus, not a coach, and it contained the men of the moment, including Galway’s captain, and man of the match, David Burke, who got to bed at 4am.

There will be plenty of time for sleep, he said while posing for a photograph with a 10-month-old patient, Conor Murray. “I’ll be working off adrenaline for the next few days.”

Coming to a place like Crumlin puts hurling in perspective. “It’s for enjoyment and sport. The real pressures of life are here,” Burke said.

The RTÉ commentator Marty Morrissey, who was at the hospital to interview some of the players, said he had never seen anything like it. The last few minutes at Croke Park on Sunday were played in silence, as the shouts stuck in the throats of nervous supporters from both Galway and Waterford.

There was a serenity around the Galway star Joe Canning as he arrived at the hospital. Hurling fans had desperately wanted him to win the All-Ireland, his brilliance over the past decade merited. At 29 he finally got his reward. How did he celebrate?

Canning went to bed at 1.30am. “I couldn’t stick it,” he said. Nearly 2,000 Galway supporters were at Citywest Hotel, where the team were staying. All of them wanted a piece of him or his team-mates.Canning wanted to spend time with his family and the “lads you’ve played with and trained with”.

After more than an hour at the hospital the players posed arm in arm with the Liam MacCarthy cup. Canning posed in a Garda hat, then put it on the head of the team’s manager, Micheál Donoghue, before they got back in the minibus. All were bracing themselves for what is to come.

“I can’t contemplate the crowds we’re going to see,” Burke said about the return to Galway later in the day. “The crowds outside the Citywest were unreal. These are days I will never forget.”