Man died after 27 days on a ventilator, CUH doctors say 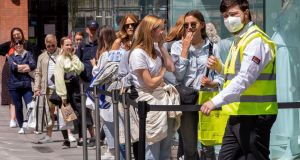 Doctors at Cork University Hospital have identified a case of Covid-19 in February that appears to predate the first known Irish case.

They say the case, involving a 43-year-old man who died after 27 days on a ventilator, represents the first known example of community transmission of the disease in the Republic.

As reported in last month’s Irish Medical Journal, the man tested positive for the virus after being tested “outside the national guidance” at the time.

He presented himself at hospital days before the first confirmed case of coronavirus in the Republic on Saturday, February 29th.

The author of the report, Dr Corinna Sadlier told RTÉ radio’s Morning Ireland that the man presented to CUH with a headache, then developed respiratory symptoms. He was treated as one would treat someone with community acquired chest infection, she said, unfortunately his condition deteriorated and he required non invasive ventilatory support and then went on to require admission to the intensive care unit.

Genetic analysis later established the particular strain in his case showed “very little difference” from the original strain from China’s Hubei province and had none of the characteristic mutations found in strains then current in Bavaria or Lombardy.

It was found to be similar to three strains from the UK but to share most genetic similarity with a strain from South Korea.

However, the man had no epidemiological link to any area where the virus was prevalent at the time or any link to a confirmed case. As a result, testing was ordered which “revealed a crucially important diagnosis”, the authors say.

“For the patient in question this had implications for management, prognosis and family contact-tracing. From a hospital perspective it allowed immediate staff and patient contact-tracing and isolation to commence.”

The study says there was “a number” of cases of onward transmission from this index case, affecting staff and patients. “It had far-reaching implications on the wider epidemiology of SARS CoV-2 in Ireland as it provided evidence of community transmission in spite of only six imported cases having been reported nationally at time of diagnosis.”

The national testing algorithm was changed as a result and other community cases were identified “at short interval”.

“This informed the national response to SAR-CoV-2 which has suppressed the curve and saved countless lives nationally.”

“This case highlights the importance of clinical judgement in deciding appropriate clinical investigation and management. In an unprecedented moment in the history of modern medicine, where evidence-based guidance and high quality clinical trials are lacking, individual clinical acumen and reasoned decision-making are more important than ever.”

Dr Sadlier thanked the family of the man for allowing medics to write about his case in the Irish medical Journal.

“It’s very tragic for his family and for the many families around the country who have lost loved ones to Covid-19 infection.

“This patient went through the non-Covid pathway when he came into hospital because at the time he met no criteria for the diagnosis to be considered, so he was being managed in our general intensive care unit, standard infection control precautions were being carried out, but the level of PPE that we use for Covid-19 infection would not have been in place at that time.

“Unfortunately there were some cases of health care workers and patients who were infected with Covid.”

Dr Sadlier explained that there was still uncertainty to when Covid-19 arrived in the country, “obviously our case antedated the first known case, or what we thought was the initial known case of Covid-19 in Ireland.

“Clearly there were chains of community transmission before this gentleman presented to hospital, so I imagine as further research in terms of the national antibody testing emerges we will have further information on that in time.”

Only time will tell when Covid-19 actually arrived in Ireland, she added. The diagnosis of this patient was unexpected at that time. “But one I’m glad we considered because identifying a community acquired case at that time showed us that we were much further along in the epidemic at a national level once we had evidence of transmission of chains of transmission in the community it made it much more likely that we were going to see an outbreak in Ireland of Covid-19 infection and that is what has emerged, it would have prompted the government, the national public health or it would have informed the national public health emergency team in terms of when to introduce measures in terms of changing guidelines - broadening screening at rapid intervals following identification of this first case and there were further cases identified in the community - in fact within three days there was a second case of community acquired Covid-19 identified in Cork, very shortly after we had further cases in the east of the country.”