Paraglider who died in Wicklow felt ‘totally free’ while flying

Funeral of Rafal Skóra (41) hears of his generosity as a family man, friend and mentor 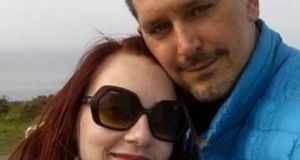 An experienced paraglider, who died tragically in a flying accident in the Wicklow Mountains, was “one of a kind”, mourners heard at his funeral on Saturday.

Rafal Skóra (41), known to friends as “Ralph”, was cremated with his paragliding helmet and radio, during a ceremony held at Dardistown Crematorium, Dublin.

The congregation heard that the only time Mr Skóra felt “totally free” was when he was in the air.

“Ralph was a man with a story,” he said. “I can’t remember the number of times he said to me: ‘I’ve got a story for you.’ He really was one of a kind.”

Mr Hogan spoke of a man who loved to talk, to learn and to help others.

“He buried himself in books and videos and anything he could get his hands on to learn. He became a really accomplished flyer very quickly and was an incredibly good mentor to newer pilots.”

While flying was his primary hobby, Mr Skóra was ultimately a family man, said Mr Hogan.

Speaking to Mr Skóra’s distraught widow, Dominika, he said: “You were everything to Ralph. He would have gone to the end of the earth for you.”

The Polish national went missing on Saturday May 9th, after he took off from Black Hill overlooking the Blessington Lakes. Gardaí and Wicklow Mountain Rescue carried out a search alongside the Irish Coast Guard Rescue team. His body was discovered alongside wreckage in a field at Ballinacor Estate, close to Rathdrum, the following morning.

The taxi driver, from Artane in North Dublin, leaves behind a wife and three children: Jakub, Benjamin and Julianna. His youngest child was born just 12 weeks ago.

Friend, Dagamara Sobdewska recited prayers and told stories in Polish for the benefit of Mr Skóra’s mother, Wieslawa Shoora, who was watching the ceremony via a live stream video.

Ripples of laughter interrupted the sobs, as neighbour Joe Kelly recited stories about the “prankster”.

“Ralph loved to chat and, man, could he talk,” said Mr Kelly. “There are many many stories. He was the best neighbour you could possibly have. He was a great friend and I will miss him very very much.”

Following Skóra’s death, over €15,000 was raised through a Go Fund Me page, which contributed to funeral costs.