Independence might not have happened without the IRA, historian says

On January 21st 1919 two RIC officers were killed in Soloheadbeg in an act that many believed started the War of Independence and a few hours later, 200km away, the Dáil sat for the first time. Video: Ronan McGreevy/ Enda O'Dowd 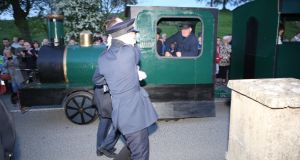 Historian and former Government minister Dr Martin Mansergh has criticised those who claim that the War of Independence was not justified.

Dr Mansergh said there was a “legitimate pride in the courage, the dangers and the hardships” endured by the IRA in the war.

He believed those who question the constitutionality of the war “never ask how many of the actions of the British at the time were constitutional” and the British government had “made up the rules, or decided to ignore them as they saw fit.”

He added: “They fought hard to prevent Irish independence from ever happening. While they had vastly superior resources, most of their forces were not fighting on home ground.”

Dr Mansergh was the chief speaker at the national centenary commemoration to mark the rescue of Seán Hogan at Knocklong railway station on May 13th, 1919.

Hogan was the youngest of those involved in the Soloheadbeg ambush in January of that year. He was picked up after a dance in Tipperary town and put on a train from Thurles to Cork. He faced certain interrogation and possible execution.

He was rescued from the train by a group of IRA volunteers including Seán Treacy and Dan Breen following a ferocious gun battle which lasted 15 minutes. Two Royal Irish Constabulary, Sergeant Peter Wallace and Constable Michael Enright were killed in the rescue.

Saturday’s gathering at Knocklong Community Field in the Co Limerick village was the culmination of a week of events to mark the centenary of the rescue. The programme included a series of four plays covering the dance, the plan, the rescue and the trial of two IRA volunteers who were executed in 1921 for their role in the rescue.

Dr Mansergh reminded those present in Knocklong that Seán Hogan’s father Matthew had been a tenant of Dr Mansergh’s great-grandfather before his lands were sold under the Wyndham Act of 1903.

Dr Mansergh described the targeting of Irish-born RIC men as “one of the tragic necessities of the time even though most of them were decent and honourable men during their duty by their lights.”

He contrasted the fight that hundreds of thousands of Irishmen had been in during the First World for the values of the rights of small nations and national self-determination with the refusal of the British to grant the same self-determination to Ireland.

The end of the war had provided a “unique opportunity” to claim independence for Ireland.

“It was an opportunity that might never have recurred or that would not have been feasible later on,” he said.

“Painful though the cost of revolution may have been on all sides, the bloodshed during the entire Irish revolution was relatively low compared to the civil wars in Europe after the end of the Great War, low compared to Irish casualties in that war, and low compare to the loss of life in the 1798 rebellion or the conflicts of the 16th and 17th centuries in Ireland.”