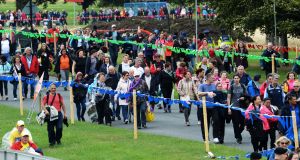 Widespread traffic restrictions are in place across the Dublin region as thousands of people descend upon the Phoenix Park for the Papal Mass which starts at 3pm.

A large number of road closures are in place until 11pm including the Navan Road, routes alongside the Phoenix Park, roads in the Kylemore area and the quays in the city centre.

A controlled access zone is in place between the city centre and theM50 (bordered by the Grand Canal to the south and stretching to Castleknock and Broombridge to the north), with gardaí directing traffic.

The Port Tunnel, Tom Clarke Bridge (East Link), the M50 and the M1 will be open all day; however cars will not be permitted to exit the M50 on the city side of Blanchardstown, at J7 Lucan and J9 Red Cow.

There is no access to Maynooth from J7 Maynooth on the M4 until 11.30pm on Sunday. All traffic will be diverted via J8 Kilcock and the Old N4 (R148).

Dublin City Council has listed 86 road closures for Sunday with a further 18 posted by Fingal County Council. Roads in Inchicore, Chapelizod, Ashtown, Castleknock, parts of Clondalkin, Drimnagh, Cabra, the Strawberry Beds and Arbour Hill will be closed throughout the day.

AA Roadwatch said traffic is very heavy around Knock in Co Mayo as people leave the mass attended by Pope Francis this morning.

They said it is busy leaving Knock northbound on the Ballyhaunis/Kiltimagh Road (R323). Several road closures remain in place there, including the main road through Knock Village (R329) and the N17 between Charlestown and Claremorris. A number of roads just off the N17 are also closed, including a stretch of the N83.

“It is extremely wet on routes across the country this morning,” AA Roadwatch said. “Slow down and increase the braking distance between you and the vehicle in front of you. Leave yourself extra travel time.”

On the Red Luas line there is no service between Blackhorse and Smithfield until 10pm. The Connolly stop is also closed until 10pm.

The Green Luas line will operate along the full line but the Phibsborough stop will be closed from 3pm to 10pm.

Irish Rail intercity services cannot be boarded on Sunday unless you have already pre-booked your ticket. A special commuter timetable is in operation on Sunday with extra services on Northern, Maynooth and Portlaoise services.

A number of Dublin Bus routes are diverted due to the road closures and passengers are advised to check their website for updates.

Bus Eireann is operating additional services on certain routes while there are diversions to services to/from Dublin. There are also diversions to routes 64, 421 and 440 due to the papal visit to Knock.

Public transport on Sunday is free for anyone travelling in the greater Dublin area with a ticket to the papal Mass.

Detailed maps showing access to the Phoenix Park site and transport options can be found on this website.