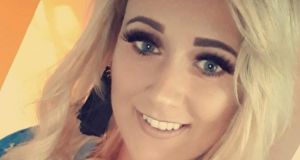 Rachel Elliott (25) suffered serious injuries after she was thrown from a car which hit a wall in Bundoran, Co Donegal, last weekend.

A 25 year old mother of one who had been in an induced coma for several days after sustaining life-changing injuries in a crash in Co Donegal last weekend has “opened her eyes”, her family have said.

Rachel Elliott, who lives outside Irvinestown in Co Fermanagh, suffered injuries to her brain, back and pelvis after she was thrown out the back window of a blue Peugeot 306 when it hit a wall in Bundoran, killing two people.

Shiva Devine (20) from Belleek and Conall McAleer (20) from Ederney, who were passengers in the car, died at the scene. Two people, believed to be brothers from Fermanagh and were also travelling in the car, were seriously injured.

Ms Elliott’s family say they had been given no guarantees by doctors at Beaumont Hospital in Dublin that she would survive the crash after she was transferred on Sunday evening last from Sligo University Hospital in a critical condition.

Doctors said she had been showing “strong signs of a brain stem injury because she was not responding.”

On Saturday however her sister Donna said: “Today we saw her open her blue eyes, this is a big thing. All we can do is keep praying that she makes a full recovery.”

“We’ve been told that if my sister pulls through there could be a good possibility that she will be paralysed,” explained Miss Elliott.

“We are not blaming anybody for this, it was nobody’s fault and that is the message that we want to get out,” she said.

Ms Elliott and Ms Devine were best friends, sharing a love of socialising, music and parenting. “They have boys the same age, three years old, and they would have played together. If Rachel does wake up how do we tell her that her best friend is dead?” asked a tearful Ms Elliott.