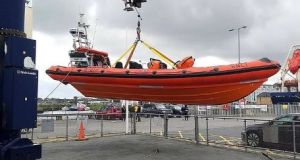 The late Tom Oliver is a member of one of Galway’s oldest fishing families, many of whom have served with voluntary lifeboat crews. Photograph: Galway RNLI

The hero family who rescued two paddleboarders in dramatic circumstances in Galway Bay in August is in mourning after a fisherman (37)* drowned on Monday afternoon.

Tom Oliver lost his life while fishing off the shore in Salthill at lunchtime.

The Mayor of Galway, Cllr Mike Cubbard, said the city was in shock over the death of the fisherman who had also participated in the search for the paddleboarders.

It is believed that the fisherman may have become entangled in one of the lines attached to fishing pots and became submerged.

He was fishing a short distance from the shore in an area between Blackrock and Silverstrand.

The alarm was raised and a Galway RNLI Lifeboat crew quickly arrived at the scene and took him ashore at the docks in the city. He was taken by ambulance to University Hospital Galway where he was pronounced dead.

The deceased man is a member of one of Galway’s oldest fishing families, many of whom have served with voluntary lifeboat crews.

In August his first cousin Patrick (38) and son Morgan (18) were hailed for their role in saving two cousins who had drifted out to sea on two paddleboards and were feared drowned.

Sara Feeney (23) and Ellen Glynn (17) drifted for 15 hours overnight after being swept out to sea in a storm but were rescued after the fisherman and his teenage son correctly worked out where they might be near the Aran Islands.

They used tidal and weather information where the paddleboard cousins might have drifted.

They located them clinging to a lobster-pot buoy south of the Aran Islands, almost 20 miles from where they had entered the sea in Furbo. The cousins went missing when they went paddleboarding on the evening of August 12th and were rescued after a large-scale search of the bay by the Olivers.

Cllr Cubbard said that news of the death of Tom Oliver had spread quickly on Monday afternoon.

“It is devastating, words can’t describe how tragic this is. It is only a few weeks since we had a mayoral reception not just to celebrate Patrick and Morgan Oliver but also to honour all the fishing families and all the rescue services.

“To go from celebrating the rescue of the two paddleboarders to this tragedy in a couple of months is just terrible. Everybody rejoiced when the two girls were rescued, it gave a lift to everyone and here we are now and the family at the centre of that are mourning the loss of one of their own.

“In August everybody shared in the joy of that rescue and now they will share in this grief with the Oliver family, the fishing community, and the people of the Claddagh and the city,” said the mayor.