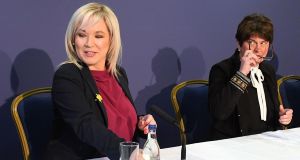 The North’s Department of Health said seven of the deaths had occurred in the 24 hours to Monday morning, and one had occurred previously.

The total number of people who have died in the North with Covid-19 now stands at 724, the department said.

A further 493 new cases of coronavirus were confirmed, bringing the total number of positive cases of Covid-19 identified in Northern Ireland since the beginning of the pandemic to 39,609.

There are now 379 people with coronavirus in the North’s hospitals, with 52 in intensive care.

Pupils returned to school in Northern Ireland on Monday after an extended, two-week half-term holiday.

The spread of Covid-19 has slowed following the introduction of tighter restrictions – including the effective shutdown of the hospitality industry – just over two weeks ago, with the average number of cases over the past seven days now at 263 per 100,000 people, compared with about 350 when the new measures were implemented.

First Minister Arlene Foster said the “current restrictions”, which are in place until November 13th, “would come to an end” and Ministers were “now constructing a strategy as to how we can then continue to live with the virus”.

The point of the restrictions, she told the BBC’s Good Morning Ulster programme on Monday, was to bring the reproduction – or “R” number – of the virus below one, “then after that we would have a strategy as to how we could continue to live with the virus but at the same time have our economy open”.

However, taking questions in the Assembly on Monday, Deputy First Minister Michelle O’Neill said the Executive intended “to publish work around an exit strategy over the coming days” but did not rule out an extension of the current restrictions.

Asked by the SDLP MLA Daniel McCrossan if she could “clarify if she agrees with the First Minister’s position that businesses should reopen if safe to do so in two weeks’ time after the restrictions lift”, Ms O’Neill said allowing as many businesses as possible to reopen was “obviously the ideal” but she had been “honest enough to say that we have to keep all options on the table”.

Ministers, Ms O’Neill said, were “consistent across the board in saying that we want to find a way to move away from continual lockdown”.

The devolved administrations in Northern Ireland, Scotland and Wales took part in a meeting of the UK’s emergency Cobra committee on Monday and agreed to “work together on a joint approach to the Christmas period”.

They also urged the UK government to further extend the job retention “furlough” scheme once a one-month extension ends on November 30th.

The North’s Minister for Finance, Conor Murphy, told the Assembly on Monday that while this new extension was “welcomed”, he would press for it to be extended beyond November “for the weeks ahead will continue to be very challenging for businesses and workers who need certainty that the support offered by the furlough scheme will remain in place”.

Meanwhile it has emerged that pressure on the facilities required to print enforcement notices has delayed the introduction of tougher penalties for breaches of the North’s coronavirus regulations.

The Executive agreed last month to increase the minimum fine to £200, and the maximum fine on conviction of a more serious breach to £10,000.

In the Assembly on Monday, the Minister for Justice, Naomi Long, said the regulations “should be laid shortly”, but this would not happen until the police were ready to enforce them.

“It is important that we do so as quickly as possible, however the timing of this will unfortunately be led largely by the time it will take for the PSNI to be able to police the new enforcement notices,” she told Assembly members.

“There have been some issues around delays in that because of the pressure on the bespoke printing that is required for those enforcement notices,” she said.

“However, as soon as those enforcement notices are ready to be able to be rolled out across the police service, we have the regulations ready to be laid in the chamber.”

A drafting process, he said, had included “the creation of new offences, new offence processing codes and other administrative actions required to give effect to any new penalties under the regulations.

“This work was conducted by departments within the NI Executive,” he said.

“When the above process was completed, the Police Service was able to confirm the design for the new penalty notices and place the order with suppliers. The tickets are produced by a specialist printer within a defined production and delivery schedule and we anticipate delivery in the near future.”

According to police statistics released on Monday, 652 officers and members of staff are absent from work due to Covid-19, 570 of whom are self-isolating.

Almost 1,800 people have aready been issued with fixed-penalty fines for breaches of the regulations, and 47 have been fined £1,000 for failing to self-isolate after returning from abroad.