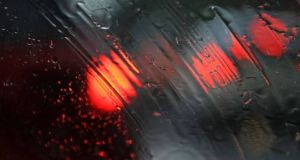 The Status Yellow rainfall warning came into affect at 5pm and will remain in force until 9am on Thursday. File photograph: Getty

A Status Yellow rainfall warning has been put in place for seven counties across Munster and south Leinster overnight, with torrential downpours set to lead to spot flooding in some locations.

The Met Éireann weather alert covers Kilkenny, Wexford, Cork, Kerry, Limerick, Tipperary and Waterford, where heavy thundery rain is expected this evening and overnight – with accumulations of 20 to 30mm.

The warning came into affect at 5pm and will remain in force until 9am on Thursday.

It will be warm and humid overnight with lowest temperatures between 12 and 17 degrees, leading to occasional mist and fog patches.

The morning will start mostly cloudy with showers, some heavy or thundery at times, especially in Munster. Some bright spells will develop elsewhere with a risk of isolated heavy showers.

There will be a “murky, misty and mostly cloudy start” on Friday, with the continued risk of showers or longer spells of rain in Munster and south Leinster and Connacht, while remaining mostly dry elsewhere.

It will be warm and humid, with highest temperatures between 19 and 23 degrees.

Showers will continue on Friday night, mostly in Munster and Connacht, with lowest temperatures between 14 and 17 degrees. It will be a degree or two cooler in the southwest, with mist and fog patches developing in light easterly or variable breezes.

Saturday will see low cloud, mist and fog to start, with sunny spells and scattered heavy showers developing by the afternoon. Highest temperatures will be between 19 and 23 degrees in light and variable breezes.

It will be mostly cloudy with occasional clear spells and scattered showers overnight. Lowest temperatures will be between 12 and 16 degrees with mist and fog patches developing.

Sunny spells and scattered showers are forecast for Sunday with some heavy or thundery bursts during the afternoon. Highest temperatures will be between 18 and 23 degrees.