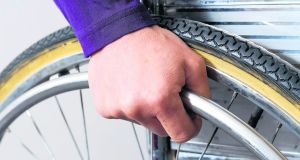 More than 13 per cent of the population, 643,000 people, have a disability. Photograph: Getty Images

People with disabilities are to be invited to serve on a committee to monitor the implementation by Ireland of the UN Convention on the Rights of Persons with Disabilities.

The Irish Human Rights and Equality Commission, which has responsibility for monitoring the State’s implementation of its UN obligations, is to issue the invitation to serve on the advisory committee, the majority of whose members will be disabled.

The committee will report on implementation when the UN conducts its first review of Ireland’s response following ratification in March this year, the last EU country to do so.

The research, Disability and Discrimination in Ireland, carried out for the commission also found that 20 per cent of reports of discrimination concerned the health services, more than any other area.

People who have psychological/emotional disability or are blind are much more likely to experience discrimination in different social settings, the study also found.

But those who are deaf or have an intellectual disability have a similar experience of discrimination as those without disabilities.

Co-author of the report Dr Joanne Banks of the ESRI said that most studies look at people with disabilities as a homogenous group and this was the first time that different categories of disability were considered.

More research was needed, she said, to establish the reasons for this difference and to see if it is because people’s deafness or intellectual disability may not be apparent when they are accessing services or making appointments.

Dr Banks said there was “intense policy development” and action by the State in the past 10 years before ratification of the convention, in creating awareness about disability rights and employment obligations.

But she said the “discrimination gap” was still significant and the findings pointed to a “need for greater awareness among policy makers and service providers of discrimination in social settings such as accessing health services”.

Chief commissioner of the human rights and equality commission Emily Logan said a lot of work was needed in Ireland where “the approach to disability remains stubbornly grounded in the medical model”, rather than a social model.

Disabled persons are much less likely to experience discrimination in the labour market. The study found that this “is entirely due to lower rates of labour market participation”.

Accessing public services including education, health and transport as well as private services such as shops, pubs and restaurants also proved more discriminatory for people with disabilities.