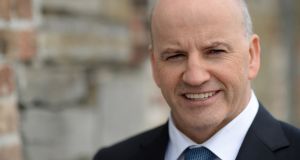 Sean Gallagher said the presidency should be as ‘transparent as possible because after all, it is taxpayer’s money’. Photograph: Dara Mac Donaill/The Irish Times

Presidential candidate Sean Gallagher has listed the directorships of four different companies as his main occupation in a declaration to the Standards in Public Office Commission (Sipo).

Mr Gallagher is not required to submit such a declaration since he is not a public office holder. It is also a matter for Sipo if it accepts his submission but Mr Gallagher said he is publishing his declaration to set a “standard” for the presidency.

The President does not make a declaration to Sipo as TDs and senators do, but Mr Gallagher said he is publishing one in the interests of transparency.

In addition, Mr Gallagher declares shares in GSN nutrition, HWT Engineering LTD and Sean Gallagher Business Matters. Under the “directorships” section, Mr Gallagher lists 24 companies of which he is a director, a large proportion of which share the address of his Dublin office on St Stephen’s Green. An interest in one residential and one commercial letting in Louth are also included, as are an 11 acre farm and property in Killygordon, Donegal, and a 25 per cent share in Mr Gallagher’s original family home in Ballyhaise, Co Cavan. Mr Gallagher currently lives in Delgany, Co Wicklow.

He said the presidency should be as “transparent as possible because after all, it is taxpayers’ money” and claimed the “most surprising” aspect of a Public Accounts Committee (PAC)hearing last week was that an annual allowance for the President is “unaudited”.

The PAC heard that the Office of the President has an annual unaudited allowance of €317,000, on top of his regular expenses and salary.

President Michael D Higgins has promised to provide a “formal statement” about spending at Áras an Uachtaráin. He has said he has no difficulty answering questions about the allowance, which he said is spent on garden parties and tea parties as well as the hosting of foreign leaders.

The Sunday Times reported that Mr Higgins has continued to draw down his €19,000 a year pension from the National University of Ireland Galway (NUIG), during his seven year term in Áras an Uachtaráin.

The pension was built up while Mr Higgins was a lecturer in sociology and politics at NUIG, but he had never said if he continued to take the pension after becoming president in 2011.

Mr Higgins did not take media questions during an appearance at the Ballinasloe Horse Fair on Sunday, but his spokesman said he “has not drawn down, and will not draw down, any pension entitlements arising from his previous services as members of the Oireachtas or as a government minister”.

It was further argued that the President “gifts €169,952 to the State every year” by forgoing the Oireachtas and ministerial pensions and by taking a salary of €250,000, €76,493 less than he is entitled to.

Mr Gallagher refused to be drawn on Mr Higgins’s university pension, saying he wants to “maintain a very positive campaign and not be critical or comment on the interests of other candidates”.

“And I won’t be doing that in this case.”

Meanwhile, Senator Joan Freeman is to formally launch her campaign for the presidency in Dublin on Monday.