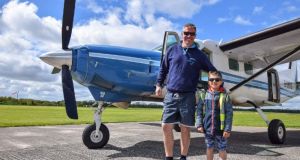 An photograph showing Niall Bowditch and Kasper Kacprzak from a GoFundMe page set up for their families.

Family members of the pilot who died in a plane crash which also killed a seven-year-old boy in Co Offaly on Sunday are expected to arrive in Ireland on Tuesday.

The pilot Niall Bowditch, who was in his 40s and from the UK, and seven-year-old Kasper Kacprzak were on a plane which crashed not long after 16 skydivers had jumped out of it without incident.

They had departed from the Irish Parachute Club’s airfield in Clonbullogue near Edenderry on Sunday at about 2.25pm.

It took the emergency services several hours to recover the bodies of the two victims from the plane before they taken to the Midland Regional Hospital, Tullamore late on Sunday night.

Postmortems were carried out on the two bodies at the hospital on Monday.

The boy’s father, who is from Poland but living in Dublin, is a regular parachutist with the club and had jumped from the plane on Sunday. He visited the scene of the crash while rescue efforts were under way.

Although initially believed to have been one of the parachutists who exited the plane in the minutes prior to it going down, gardaí now say he was on the ground at the time. The aircraft had carried out five flights from the airfield on Sunday and the boy’s father had participated in an earlier jump.

The pilot was described by one local club member as very experienced. It is understood he was a keen skydiver as well as a pilot.

Local Fianna Fáil councillor Eddie Fitzpatrick said he had been told the man was “about 45 or 46 years of age and he would have huge experience in flying that type of aircraft.” He said he believed the pilot was also a flying instructor in the UK.

According to Cllr Fitzpatrick, a Pilatus plane usually used by the parachute club had been sent abroad for an overhaul and the Cessna Caravan plane that crashed was being used instead.

He said the club had been quiet over the winter due to the bad weather and it was only now getting back to full operation.

Efforts to recover the wreckage of the plane took several hours on Monday. The task was made more difficult by the fact it was buried to a depth of about two metres in the bog.

The Air Accident Investigation Unit will now carry out an examination of the plane at their site in Gormanston, Co Meath to try and uncover the cause of the crash.

Gardaí said last night that they would not be releasing the names of the victims until they were satisfied that all family members had been informed.

They were providing assistance to the family of the boy and expected members of the pilot’s family to arrive in Ireland on Tuesday.

Prayers were said for the victims the Church of the Sacred Heart in Clonbullogue on Monday morning.

The Irish Parachute Club, which has between 150 and 200 members, remained closed on Monday.

“The board of directors, members and friends of the Irish Parachute Club are deeply saddened at the death of the occupants of the aircraft that was operating on behalf of the club. Our thoughts and prayers are with those affected,” the club said in a statement. “We would like to thank the Air Accident Investigation Unit and the emergency services who are continuing their investigation at this very difficult time.”

Local Sinn Féin councillor Martin O’Reilly said the community is shocked and saddened over the deaths.

“It’s tragic. That’s the only word I can use at the moment. It is all only sinking in about the extent of the tragedy.” He said the thoughts of the community are with the families of both victims and those involved in the recovery effort.

An online fundraising campaign has raised over €17,000 for the families of a young boy and pilot.