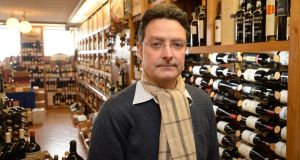 Joël Durand, owner of Blackrock Cellar off-licence in Dublin, has already reduced his opening hours, and now closes at 8pm instead of 10pm, because ‘there is no business after 8pm’. Photograph: Dara Mac Donaill

The National Off-licence Association (Noffla) has warned against any changes to the opening hours of small, family-owned businesses, adding that minimum unit pricing is the best way to reduce bulk buying of alcohol.

At a meeting of the Fine Gael parliamentary party on Tuesday, politicians suggested reducing opening hours of off-licences in order to clamp down on house parties and prevent the spread of coronavirus.

Speaking on RTÉ Radio One about the issue, Minister of State Patrick O’Donovan said there are people with “nothing but alcohol in their shopping trolleys”. “We cannot pretend that house parties aren’t going on when they clearly are,” he added.

However, Evelyn Jones, Government affairs director at Noffla, said off-licences “don’t typically see bulk purchases of alcohol” and that this sort of buying is more prevalent in larger mixed retailers and supermarkets.

“Rather, our customers would be buying in smaller volumes, often looking for a more premium product for special occasions. However, with new restrictions now on family/social gatherings, we are seeing sales volumes gradually decline for these kinds of purchases too,” Ms Jones said.

“The majority of licences in the off-trade are held by supermarkets, petrol stations and convenience stores; small, independent off-licences that Noffla represents make up only one-third of the overall sector, approximately.”

However, Ms Jones said the association agrees that “there ought to be more control over the sale, and in particular the pricing” of alcohol in order to “cut out dangerous and irresponsible consumption”.

Joël Durand, owner of Blackrock Cellar off-licence in Dublin, said while he is not opposed to closing earlier if public health officials believe it is necessary, he has not seen people buying in large quantities.

He already reduced his opening hours, and now closes at 8pm instead of 10pm, because “there is no business after 8pm”.

“People can’t go to restaurants so they’re spending more on high-quality wine, craft beer, whiskey and cocktails. They’re recreating experiences at home with their wife or husband,” he said.

“It’s maybe unfair to put that responsibility on the retailers. We can’t really control what people do at home. It’s a difficult situation.”

Mark Grainger, who owns Grainger’s off-licence in Swords, does not welcome the proposals and feels like off-licences are being painted as the “bad guys”.

“People are coming in and getting their six cans of Bud, or a bottle of wine, but we’re not seeing anybody coming in buying two or three slabs of beer. What’s being mentioned on the news, saying there are people coming in buying slabs and slabs just isn’t the case,” he said.

He also called for the introduction of minimum unit pricing.

“If you look at supermarkets, they’re selling slabs of beer for cheaper than we can buy them in for. They can afford to sell them at a loss, but as a standalone, independent off-licence, we can’t do that.”

Meanwhile Neil McDonnell, chief executive of the Irish Small Medium Enterprise association (Isme), said unless people change how their social gatherings look, he believes “some level of constraint on off-licence sales can be expected”.