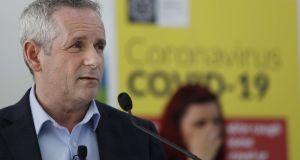 There are “obvious gaps in clarity and responsibility” in the governance and oversight of the private nursing home sector, Health Service Executive (HSE) chief executive Paul Reid has said.

He told a news conference in University College Dublin that the HSE was providing extraordinary levels of support to the sector during the pandemic but was not responsible for regulating it.

“There are obvious gaps in clarity and responsibility in the overall of governance and oversight of private nursing homes in particular,” he said.

“Any reflection at this point in time would say it is something to be looked at - it is a consideration for policy makers and not ourselves in the HSE, but it would seem like an obvious learning to date.”

Mr Reid was speaking after The Irish Times reported details of more than 1,000 deaths linked to 167 care homes or residential settings around the State and following the Oireacthas special committee on Covid-19 holding hearings on the response to the crisis in nursing homes this week.

“Whatever the model is in the future, you’ve heard Hiqa express concerns in relation to it… from my perspective the HSE don’t have a direct relationship on a year to year basis, we provide support as required,” he said.

David Walsh, the HSE national director for community operations, said interaction between nursing homes and the HSE had increased during the crisis and that a closer relationship may follow in the future.

He said “an enhanced outreach role for acute hospitals” would be examined going forward.

“This isn’t so much about the home but around the residents in the home and having the correct clinical pathways to and from various other aspects of service,” he said.

Ann O’Connor, the HSE’s chief operations officer, said that in line with the Slaintecare health service reform plan, all aspects of care in the community were being examined.

“That will have to include people who live in nursing homes in some way that is more enhanced than what it has been heretofore,” she said. “There will be a mechanism there for us to put our hands around local populations in more detail over the coming months”.

Ms O’Connor said 852 nursing homes and residential settings were receiving support from the HSE at present, and there were seven facilities in the public and private sectors viewed as being “a significant risk”.

The HSE also said it has missed its target for so-called “end to end” testing turnaround, which measures the time taken from an appointment for a test being taken to the completion of contact tracing.

Mr Reid also gave data on the first batch of “close contacts” of confirmed Covid-19 cases to be tested as part of a strategy recently initiated by the HSE.

Mr Reid encouraged members of the public who discover they are close contacts of a confirmed case to avail of testing, which was a key part of the strategy to “track the disease and (the) continuous drive to eliminate it”.