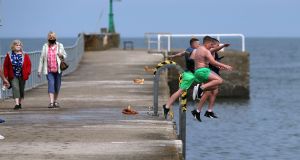 Fianna Fáil’s justice spokesman Jim O’Callaghan has called on the Government to take “a calculated risk” and to start easing some of the Covid-19 restrictions.

Mr O’Callaghan told RTÉ radio’s Morning Ireland that he wasn’t criticising the advice being given by the chief medical officer Tony Holohan. It was Dr Holohan’s job to advise the Government, but the Government must take other factors into account when making decisions.

It was never the intention of lockdown to stop people getting sick or catching the virus, it was so hospitals and ICUs would not be overwhelmed, said Mr O’Callaghan.

The Government needed to take other factors into consideration, said Mr O’Callaghan, such as the impact of the lockdown on children, the elderly, mental health, domestic violence and the economy – which is not just about money, he added, it was about putting protections in place “so we can look after people”.

Ireland’s planned phases go through until August 10th, he said, while Spain is going to reopen in June. Everyone understood that there cannot be large congregated crowds for some time, but there is a need to expedite the lifting of some restrictions, he said.

Speaking on Newstalk radio, John Halligan said the perceived benefits of lockdown would have to be weighed against its costs. He said the economy faces devastation.

“I’m not saying to abandon the complete lockdown, that would be madness, but I think the stages we have set are too far apart, we need to trust people. We have to consider the economy, we have to consider people’s lives.”

On the question of schools re-opening, immunology expert Luke O’Neill said there is no scientific evidence to say schools should not re-open, but that it should be done cautiously.

“The evidence is even more compelling that children are not a major problem here, unlike flu. The schools closure is justified if it’s a disease like flu because children pick that up among each other and then they go and spread it at home - that’s why you close schools in a flu pandemic,” he told the Pat Kenny show on Newstalk.

“This is a different virus with different properties - and the more it’s gone on, the more we’ve realised this. Now there’s really more and compelling evidence that kids aren’t a big source of spread.”

Meanwhile, the director of the Irish Council for Civil Liberties, Liam Herrick, has called for safeguards to be put in place for the introduction of the mandatory passenger locator form.

While it was reasonable to introduce regulations of this type, he said, there were concerns around issues like data protection.

Mr Herrick told RTÉ radio’s Morning Ireland that there are a lot of concerns about the control of personal information by the HSE and that it would be helpful to have more details about how it will operate in practice.

There may be a limited number of scenarios where a person may not be in a position to fill out the form, he added, for example if the person were claiming international protection when they arrived.

Mr Herrick said there was particular concern about criminal sanctions and it was felt that this was an inappropriate area for the gardaí to be involved. More clarification would be helpful, he said.