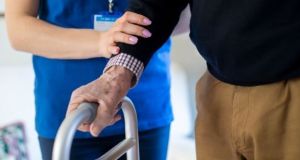 The Royal College of Surgeons in Ireland (RSCI) hospital group took over the management of the Dealgan House nursing home in Dundalk on April 17th to ensure safe staffing levels amid a major outbreak of Covid-19 in the facility. Image: Getty.

The operation of a Co Louth nursing home badly hit by a Covid-19 outbreak has been transferred back to the private provider by the Royal College of Surgeons in Ireland (RCSI) hospital group.

The hospital group took over the management of the Dealgan House nursing home in Dundalk on April 17th to ensure safe staffing levels amid a major outbreak of the disease in the facility.

Dealgan House has 84 beds and has been one of the worst hit nursing homes in the State, with 22 residents dying from Covid-19 there since April 1st.

The RCSI group still contacts the nursing home for a daily “health check” to assess the need for any supports, according to an update provided by Minister for Health Simon Harris to local TDs on Wednesday.

Eoin Farrelly, managing director of Dealgan House, previously told relatives that at the height of the nursing home’s virus outbreak only seven of the home’s 24-strong nursing staff were available.

The Health Information and Quality Authority (Hiqa) has begun an inspection of standards in the private nursing home.

Phelim Quinn, Hiqa chief executive, has said inspectors will review the nursing home’s records of residents who died as a result of the coronavirus outbreak.

The inspection will assess the provider’s compliance with statutory regulations, Mr Quinn told Louth TD Fergus O’Dowd in a letter on 18th May. This would include a review of “the governance, management and risk systems in place to maintain the safety and effectiveness of care provided to residents,” he said.

In an update, Mr Harris said all residents were now in single occupancy rooms, and personal protective equipment (PPE) for staff was “readily available.”

The Health Service Executive has been advised that the “situation has stabilised,” and there had been no further spread of Covid-19, with safe staffing levels in place, he said.

Responding to calls for an independent inquiry into the outbreak in Dealgan House, Mr Harris said Hiqa was the independent regulator for the sector. The watchdog had “wide ranging powers” to withdraw a nursing home’s registration to operate if inspections identified serious concerns, he said.

Mr O’Dowd, a Fine Gael TD, said welcomed Hiqa’s inspection of the nursing home and called for “accountability” and an explanation for relatives of residents who died there.

“I just don’t think it’s going to give families answers and closure,” he said.

Sinn Féin TD Ruairí Ó Murchú said he was “disappointed” that Mr Harris did not commit to an independent inquiry.

“It remains the families’ wish to have a full inquiry into what took place and what went wrong. It is the only way to ensure that nothing like this happens again,” he said.

In a statement, Mr Farrelly said Hiqa’s inspection would try to answer “the many questions that we have, and that are being asked of us, especially as to how the virus got into our nursing home”.

Management welcomed the inspection and was complying fully with Hiqa, he said.

Coronavirus: One death, 25 new cases reported in State 17:49
Judge gives landlord a week to halt Covid-19 parties near UCC 17:32
Brightest comet of the century visible in Irish skies for the next week 17:09
Planning permission granted for Waterford North Quays 16:55
Children who go abroad must self-isolate for 14 days before return to school in September 16:55