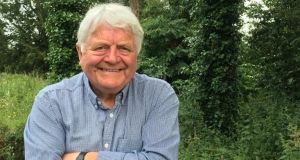 Don Conroy: ‘If in my own small way I can distract people, and entertain them, with a few drawings and sketches and stories, I’ll be happy’

For many of us in the coronavirus lockdown, one of the things that soothes us is to watch Don Conroy, the former children’s television staple, drawing on his new Covid-coinciding YouTube channel. It feels so wholesome.

It’s surprising, then, to learn, via his Twitter account, that Conroy once appeared alongside Lee Marvin in a gritty war film called The Big Red One. “It was directed by Samuel Fuller, a great B-movie director,” explains Conroy, who was once an actor. “I auditioned for it. When I went there Sam Fuller said to me, ‘You got a Hollywood face, kid.”

Approaching Lee Marvin, Conroy says, “was like going near a grizzly bear. He sent off this aura thing: don’t come near me. But I actually got along really well with him… He says to me, ‘Hey, kid, I like you. You’re not full of s***… Why don’t you come and visit me in Tucson, Arizona? There’s nothing there but desert and goddamn rattlesnakes. You’ll love it.’”

This is a bit of an understandable diversion from the real reason I’m talking to the former star of Paint for Fun and The Den, to see how he’s dealing with his time cocooning. (He’s now 70.) The answer is that he’s drawing and painting, and also keeping children occupied and inspired with his YouTube channel. (He will also be helping to judge The Irish Times children's "isolation art" competition - click here to find out more.)

“I’m very grateful to anybody who enjoys it,” he says. “The marvellous thing about children is, if a child is drawing before the age of eight, they’re drawing away and it’s a picture story. ‘That’s Mummy, and she’s going to the supermarket, and that’s Daddy mowing the lawn.’ And you look at it and it’s like a spider running across the page. It’s lovely, and it’s only when they start looking for approval with their drawings that they begin worrying about it.

“Miró said we need to draw like children again, we need to look at the world with fresh eyes, and that’s what I’m really hoping to do with people. Get people to enjoy the creative journey, to give themselves permission to draw and paint. It’s not just artists who have the right to paint or draw. Anyone can draw or paint. Michelangelo once said there’s a secret shape in everything. If you get a chance to sit down and sketch something, suddenly another world opens up to you, and it becomes extremely exciting.”

We’ve seen on the news the incredible courage and dedication that people are showing, and we may not be out on the front line, but by doing something like art for yourself it can be a form of healing

Conroy is planning to do some workshops for adults, too. Adults, he says, often worry too much about the result when they could be enjoying the process. “When Michelangelo was waiting to get paid by the pope, and had no money and couldn’t afford to buy marble or paint or canvases, he’d go out and make beautiful snowmen. His friends said, ‘Michelangelo, you’re crazy! Those beautiful figures, they’re going to melt,’ and he said, ‘It doesn’t matter. What matters is doing it.’”

Conroy has a suggestion for everyone to follow. “Start a little art journal, or spiritual journal, and write down your feelings and thoughts – and be totally honest with yourself. Try a bit of drawing or doodling or write a line of poem or even a nice quotation you heard. Albert Einstein said creativity is like a virus: it should be spread... We’ve seen on the news the incredible courage and dedication that people are showing, and we may not be out on the front line, but by doing something like art for yourself it can be a form of healing.”

He talks a little about his childhood, in south Dublin, discovering art and nature, watching kingfishers and herons along the River Dodder. When he was seven or eight, he says, he would walk from Donnybrook into town and wander around the National Gallery of Ireland and the Natural History Museum. “When they got to know me, I asked in my innocence, ‘Where do you get all the animals from?’ And one of the attendants said” – he puts on an ominous voice – “‘They come here to die.’” He laughs.

I miss talking to people and going out for walks. Because people see me on television they will come over and talk and tell you all kinds of things. It’s very nice. You can have great conversations if you’re open to listening

Does he miss going out and about now that he has to cocoon? He misses meeting his children and grandchildren, although he and his wife, Gaye, regularly talk to them. “And I miss talking to people and going out for walks. Because people see me on television they will come over and talk and tell you all kinds of things. It’s very nice. You can have great conversations if you’re open to listening.”

Luckily, he’s never bored, he says. “I’m always drawing or painting or writing. I like writing poetry as well, just for my own pleasure. And I also had a chance to finish paintings of people in the family... And now there’s the YouTube channel.”

Does he worry about coronavirus? Gaye has a medical background, he says, so they take it very seriously. “But we have to work between information and fear, and if we live too much in fear we get brain frozen, and that’s not a good state to be in. I have nothing but great admiration for people on the front line, but if in my own small way I can distract people, and entertain them, with a few drawings and sketches and stories, I’ll be happy.” He laughs. “We’re both definitely cocooned all right, but let’s hope we all end up like caterpillars and blossom into butterflies.”