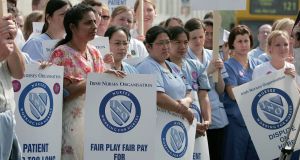 Nurses are due to hold a national one-hour work stoppage this Wednesday. Photograph: Collins

The Labour Court has intervened in an attempt to avert a planned national strike by nurses scheduled to take place on Wednesday.

The Irish Nurses and Midwives Organisation (INMO) is attending a hearing at the Labour Court , which began at 4.30pm on Monday.

A spokesman for the INMO said in the meantime plans for the national 24-hour work stoppage would continue.

The Labour Court process is expected to involve the HSE, Department of Health, Department of Public Expenditure and Reform, as well as the INMO and the general secretary of the Irish Congress of Trade Unions Patricia King,

Arriving at the talks, Ms King said the chairman of the Labour Court Kevin Foley had invited the parties to an “exploratory discussion “.

She said there would be a “full and open” conversation with Mr Foley “and let him know from our perspective where we are at”.

Asked whether she was hopeful that a resolution could be found, Ms King said she was always hopeful.

Ahead of the talks, the INMO’s spokesman said: “We have consistently said that we are open to talks and that this strike can be averted. We will attend these talks in good faith.

“But the ball is firmly in the Government’s court. They need to make serious proposals if they are to avert industrial action.

“Strike preparations continue. We are extremely grateful for the outpouring of support from the public, our colleagues in the health service, and from Irish nurses and midwives working overseas.”

A spokeswoman for Minister for Health Simon Harris said: “Management has received and accepted an invitation to the Labour Court. The Minister welcomes the intervention and is keen every avenue is explored to avoid this dispute.”

Earlier, the HSE’s chief clinical officer warned there will be “reduced levels of care” in emergency departments and hospitals on Wednesday if a planned strike by nurses goes ahead.

Dr Colm Henry also said even if the strike was called off, it would not be a case of normal service resuming.

Nurses are scheduled to hold the first in a series of 24-hour strikes over pay on Wednesday.

“It is a strike, there will be a reduced level of care. Even if the strike is called off, reactivation may not be as neat as we would like. It won’t be a normal day,” Dr Henry said on Monday.

The HSE has been working with the INMO seeking exemptions for some areas, “for those most in need.”

Dr Henry said planned in patient day care services would not take place on Wednesday but said urgent cancer services such as chemotherapy would go ahead.

Cancelled inpatient services would be re-prioritised and rescheduled as soon as possible, Dr Henry told RTÉ’s radio’s News at One.

He appealed to the public not to go to emergency departments on Wednesday unless absolutely necessary.

He said there would be “excessive” pressure on services. “We will prioritise those in greatest need”, with a pared down service but “stay away if you can”.

When asked if families could help with the care of patients, he said not all families would be in a position to do so.

Also on Monday, emergency department doctors expressed concern about patient safety implications due to the strike.

The Irish Association for Emergency Medicine (IAEM) said if there were in sufficient nurses available “patient care will inevitably be compromised”.

IAEM president Dr Emily O’Conor said the association believed normal nursing staff levels were required to be able to deal safely with patients attending, particularly as alternative services such as local injury units would be closed as a result of the industrial action.

In a letter to the HSE and the INMO, Dr O’Conor said: “As an absolute minimum therefore we are of the view that the staffing configuration that would apply on Christmas Day should be what is provided to the country’s emergency departments during the period of industrial action.

“Unfortunately, anything less than this will [have] significantly risk adverse impacts for patients and genuine harm could occur. We appreciate that neither of these eventualities is in the interest of the parties involved.”

She said unlike most other services, emergency departments were, by definition, where patients went or were brought because they had “life or limb threatening conditions or other serious conditions which put their health at risk”.

“Only a tiny percentage of our attendances could be described as ‘planned’ work and clearly activities such as scheduled review clinics will be cancelled on the dates of the proposed industrial action.

“On this basis, we would strongly argue that it is imperative that the nurse staffing of emergency departments is maintained during the industrial action and that nurses, who are a particularly valued and skilled workforce, are allowed to do what they normally do in providing emergency department clinical care.”

Dr O’Conor said on a typical day about 3,500 patients attended emergency departments across the country. She said all of these patients needed to be prioritised and treated.