Six new bus routes will cut through gardens of 655 homes

Those affected in south and west Dublin to get average compensation of €25,000 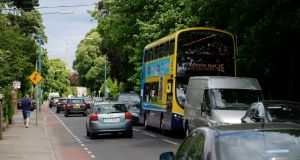 Those who may lose part of their front gardens under the plans for the new bus routes include properties on Terenure Road East. Photograph Nick Bradshaw

A further 665 homes in south and west Dublin stand to lose part of their front gardens under six core bus corridors announced by the National Transport Authority (NTA).

The NTA announced on Wednesday details of the second phase of the BusConnects core bus corridor project, which in total involves providing 230km of dedicated bus lanes and 200km of cycle on 16 of the busiest routes in and out of the city.

A total of 180 car parking spaces will be lost along these corridors and 290 trees removed. A public consultation process in relation to these six corridors will run until the end of March.

The NTA said the project will deliver journey time savings of up to 40-50 per cent on each corridor.

Those who may lose part of their front gardens under the plans include properties on Terenure Road East, Rathfarnham Road, Rathgar Road, Kimmage Road Lower, Crumlin Road and Drimnagh Road.

Some 345 property owners were informed last November they are set to lose part of their gardens under the Clongriffin, Swords, Blanchardstown and Lucan to city centre corridors. A further 300 owners are expected to be notified from next month in relation to the last six corridors: Ballymun to city centre, Bray to city centre, UCD Ballsbridge to city centre and Ringsend to the city centre, Finglas to Phibsborough and Blackrock to Merrion.

Anne Graham, chief executive of the NTA said while a project of this scale will bring “many challenges”, the BusConnects core bus corridor project is “needed now more than ever”.

“With the city due to expand by 25 per cent by 2040, continuous bus priority and segregated cycle lanes will be required to meet the growing demand for fast, reliable, punctual and convenient bus journeys in and out of the city centre, and safe cycling facilities for the growing numbers of cyclists,” she said.

Ms Graham said the NTA is offering one-to-one meetings with affected property owners and is organising information events and community forums along each of the six corridors.

“We have been encouraged by the positive level of engagement the NTA has witnessed since the launch of the core bus corridors project public consultation in November 2018 and we will examine all observations carefully over the coming weeks as we look to develop final preferred routes,” she added.

The BusConnects core bus corridor project is subject to approval from An Bord Pleanála and construction of new lanes would not begin until 2021.

Separately, some 30,000 submissions were received by the NTA in relation to the redesign of the bus network. A revised network is due to be published by mid-2019, and a further round of public consultation will begin.