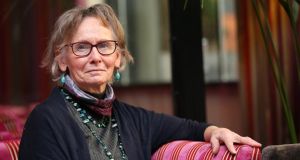 Jacinta Dixon, an advocate for people with dementia, was diagnosed with Alzheimer’s disease in 2017 Photograph: Laura Hutton/The Irish Times

Difficulties in accessing home care supports for people living with dementia are a source of “anxiety, frustration and loneliness” for them and they feel discouraged from talking openly about these issues, new research has found.

A policy paper entitled Dementia and Loneliness published by the Alzheimer Society of Ireland (ASI) on Monday says people living with dementia who live alone in the community have few social connections or meaningful relationships outside of their own families.

They also attribute reductions in their social interactions to cognitive deficits that accompany their condition.

Financial insecurity was also a “major source of concern” for people living with dementia as they were no longer working. This was a contributing factor to their lack of social interaction with others.

The society commissioned researchers from University College Cork to carry out “a focused piece of research that would inform current understandings around dementia and loneliness in Ireland”.

There are 47 million people living with dementia worldwide and an estimated 55,000 people have been diagnosed with the condition in Ireland. About 4,000 of those are less than 65 years of age.

In addition to a review of existing literature, eight individuals aged 55 years and older who had been diagnosed with dementia participated in individual interviews, with the duration of their diagnosis ranging from eight months to several years.

“The report indicates that loneliness is not necessarily caused by being alone, but by being without some definite needed relationship or set of relationships or indeed the availability of local supports and services,” the society said.

“The study, in particular, found that access to home care support and public nurses enabled families to manage living life with dementia and by the same token, however, the difficulties of securing these supports were a source of anxiety, frustration, and loneliness.”

The report notes people with dementia often face “a multiplicity of stigmas” which compound factors that contribute to their experiences with loneliness.

Among the report’s key recommendations are that people living with dementia should be enabled to continue to engage in the meaningful social activities they enjoyed doing before their dementia diagnosis, should they wish to do so.

It also recommends that accessible and simple information to help understand dementia should be provided to the general public, service providers, health and social care professionals, and relevant volunteer/community groups.

Research and policy manager with the Alzheimer Society Dr Bernadette Rock said: “This important study clearly shows that fear and stigma continue to surround the public perception of dementia in Ireland. This is very worrying.

“The importance of people with dementia staying and indeed their carers staying active in their own community cannot be underestimated.”

Jacinta Dixon (68) from Clondalkin in Dublin was diagnosed with Alzheimer’s disease in 2017 and says her family were “a fantastic support to me and they are still very close to me”.

She is no longer working.

“Last year I joined the Irish Dementia Working Group (IDWG), which is an advocacy group for people living with dementia and is supported by The ASI. It gives me an opportunity to be productive and active. But to be honest, I was really struggling before being involved in this working group.

“Before getting involved in the group, I was lonely. My family are so caring and they are wonderfully supportive; they take me out and call to my house, but when I close the door I am alone.

“I have experienced isolation. My neighbours and people in the community are great – but a lot of people still don’t really know what dementia is, how it affects people. And they definitely don’t understand that it can affect people at a relatively young age,” she says.

“There is a big stigma around having dementia. People think that you are not really a person anymore and that your life is over.”

Ms Dixon says this “horrible stigma creates a lot of unnecessary loneliness for people with dementia around the country”.

“Often people overcompensate and treat you too nicely – sometimes this is even worse than being ignored. I think it’s really important that people with dementia stay involved in their own community and that adequate supports and services are available to people to do this.

“This report will help guide future work in this area and stop more people with dementia from experiencing loneliness in their own community.”