Owners of Dublin 8 apartments each face €5,300 bill over fire safety and balcony defects 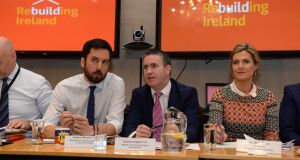 Minister for Housing Eoghan Murphy during a housing summit in the Custom House with Minister of State Damien English and Chair of the Joint Oireachtas Committee Maria Bailey. Photograph: Dara Mac Dónaill

The Government has again said it will not set up a redress scheme to assist the owners of Celtic Tiger-era apartments who face bills to repair building defects in their properties.

The Irish Times reported on Wednesday that apartment owners in Dublin 8 were told by a developer to find “compelling” legal advice showing why it should pay the €563,350 bill to address fire safety and balcony defects found in the complex. The bill facing each owner is some €5,300.

Sherborough Enterprises Limited, a development company controlled by members of the family that owns the O’Callaghan hotel group, told private owners at Cathedral Court it had obtained legal advice stating that it did not have any obligation to pay for the remediation works.

Asked about the issue of State support for those facing such bills, a spokesman for Minister for Housing Eoghan Murphy said: “It is not possible for the State to take on responsibility/liability for all legacy issues of defective building materials or workmanship. Nor would it send the right message to the industry regarding their responsibility for compliance.”

He said the department had overall responsibility for maintaining an effective regulatory framework for building standards but has no general statutory role in or budget for resolving defects in privately owned buildings.

Sinn Féin housing spokesman Eoin Ó Broin called for a State and industry funded redress scheme for owners of defective properties built by firms who are no longer in operation. He said the State “must accept its share of the responsibility for the issue of latent defects”.

“The fact that the State has already funded a pyrite remediation scheme and only last week announced a new remediation scheme for homes affected by pyrite and mica block in Donegal and Mayo shows they know they have a role to play in addressing this issue,” he said.

Deirdre Ní Fhloinn, a construction lawyer and Green Party local election candidate, said she believed owners could be able to pursue developers in such cases under the 2011 Multi-Unit Developments Act. She said that under the Act, a court can order a developer to finish its work “in accordance with the original building contract and with the Planning and Building Control Acts”.

Where this option is not viable, Ms Ní Fhloinn said the least the State could do is make sure owners who must pay to repair defects are given tax relief for the works.

The Apartment Owners’ Network has set up an online petition calling on the Government to create a latent defects redress scheme. The petition says many of Celtic Tiger-era blocks are “not safe in the event of a fire”.

“Home owners and owners’ management companies face prohibitive remediation costs,” it said. “The State’s regulatory regime at the time of construction was not fit for purpose.”

Mr O’Brien said his party’s Bill – the Multi-Unit Developments (Amendment) (Sinking Fund) Bill 2018 – would provide for a sinking fund for essential maintenance such as fire safety or water infrastructure.

He also said the party was looking at another bill to set up an ombudsman for OMCs which would oversee their financial planning.

“This is sadly not the first time in Ireland that a development company has expected apartment owners to pay for repairs to the serious fire safety shortcomings identified in their complex,” he said.