Saoirse McHugh of the Green Party was the most memorable performer of the three RTÉ TV debates for the MEP candidates. Video: RTÉ 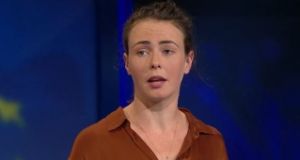 Green Party candidate for Europe Saoirse McHugh told candidate Peter Casey to ‘go on Dancing With The Stars if you want attention that much” during a debate on RTÉ’s Primetime.

The outcome of past elections has been influenced by TV debates in the final week of the campaign. The most obvious was when Sean Gallagher’s bid for the Áras in 2011 ended dramatically with a carcrash Frontline debate in which he struggled to deny he was a proxy Fianna Fáil candidate.

Bertie Ahern arguably moved momentum firmly towards Fianna Fáil in the 2007 debate with Enda Kenny, when he was far more surefooted in fielding economic questions; in the second-tier debate that year then PD leader Michael McDowell backfooted Gerry Adams’ who had a poor grasp on economic matters.

In 2016, Stephen Donnelly, then of the fledgling Social Democrats, came to wider national prominence after a confident and unruffled performance that bested all others, in the debate hosted by Claire Byrne on RTÉ.

And for the European elections in 2019, the unexpected “star” of the debates has been one of the hitherto lesser known candidates, Saoirse McHugh of the Green Party.

Mc Hugh, a 28-year-old genetic scientist from Achill in Co Mayo, has never stood for elected office before and would have no profile outside the Green Party before this election campaign.

Yet, it was she who is regarded as having given the stand-out performance of the three debates, especially when she challenged Independent Peter Casey on his views on immigration.

She had a number of memorable lines: “Millionaires blaming migrants is an old trope and it’s boring,” was one.

Another was: “Go on Dancing With The Stars if you want attention that much, Peter.”

In the wake of the live debate, there was much praise for McHugh’s performance on social media. She was trending on Twitter for a while. And in the following 24 hours, her odds tumbled from 50 to 1, down to 4 to 1. In an election where there is a discernible Green surge, she was having a moment in probably the hardest of the three constituencies for the party. In the space of a day, she had moved from being an also-ran, to a possible outside contender for a seat.

“I was so mad nervous beforehand. Directly afterwards I had no idea of how I would have come across,” she told The Irish Times.

“It went down surprisingly well. I did not feel it warranted the reaction.”

She said she knew that certain issues would come up, including agriculture and climate change, which she was prepared for.

“I knew immigration was going to come up because Peter Casey has made that his thing. It’s hard to know how that would go because his views are so choppy and changey (sic) so I had to respond to what I heard there,” she said.

In such a rural constituency, how was she able to sell a message that involves reducing a dependency on beef?

“A lot of the beef industry is really struggling because of over production. We do produce a luxury item. If you over produce you drive the price down.

“The dairy herd is increasing there will be dairy beef as well further undercutting it. A lot of beef farmers are open to suggestion. All the hill farmers also know they have so much to offer to climate action.

“That has to be reflected in CAP. So I think there will be a strong farmer vote for the Greens.”

At the final Green conference yesterday, party leader Eamon Ryan predicted Mc Hugh would win a seat. Even with his optimism it was a tall order, especially given the lateness of the debate.

“It would have been great if it happened a few days earlier. I am trying not to run away with myself but I think I could take a seat,” she says.

Irrespective of the outcome, she says she thinks she will stand for the party again in future.