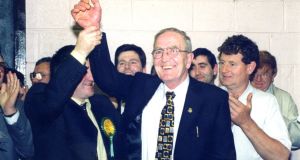 Fianna Fáil leader Michéal Martin has paid tribute to former Co Meath TD and senator Michael Lynch, who has died at the age of 84.

Mr Lynch was elected as a TD twice, in February 1982 and 1987. He lost his seat in the 1989 general election when he was edged out by Noel Dempsey despite a higher first-preference share. In the 1980s he also served as a senator.

He was a local councillor in his hometown of Oldcastle for over 40 years. He retired at the 2009 local elections at the age of 74.

His retirement brought to an end almost a century of public service as his father Philip had been a Sinn Féin and then Fianna Fáil councillor.

“Michael had the common touch [and he] served his community and our party with distinction and pride.”

Mr Lynch owned and ran the Ceili House pub in Oldcastle. He was a traditional musician who was involved in Comhaltas Ceoltóiri Éireann.

He was predeceased by his wife Maureen and is survived by his sons Marty and Lorcan, daughters, Noeleen and Carla, and extended family.

1 The FinCEN files: The billion dollar a month money trail
2 Coronavirus: 396 more cases as public is urged to help protect ‘older and vulnerable’
3 Lockdown measures and rising anger in Madrid as Covid takes hold again
4 The Sack of Balbriggan: The burning of a town that shocked the world 100 years ago
5 Coronavirus: Germany and Iceland look set to be taken off ‘green list’
Real news has value SUBSCRIBE