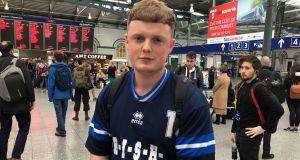 ”I have seen people drinking alcohol on the trains but in general I haven’t seen any antisocial behaviour as a result of it,” says TCD student Conor Hartnett of Irish Rail’s drink ban on some services.

Standing in the entrance of Heuston train station, Conor Hartnett (19) pauses when asked his opinion on Irish Rail’s new rule banning alcohol on some services from Dublin to Galway and Westport.

“I didn’t really think it was necessary,” says Harnett, a second-year Trinity College student who travels home to Galway twice a month. “I have seen people drinking alcohol on the trains but in general I haven’t seen any antisocial behaviour as a result of it.”

Harnett’s sentiment was echoed by several travellers at the Heuston platform Friday afternoon, many of whom have never observed alcohol-related disruptive behaviour and see no issues with the current rules.

“I mean obviously there are pros and cons, but I don’t think the ban is necessary,” said Cáit O’Brien (19), a Dublin City University nursing student who travels home to east Galway every Friday afternoon.

“People just after a long day of work don’t always want to be listening to this behaviour. But then there are people that just want to enjoy themselves going into the weekend.”

Beginning October 12th, the company will cease alcohol sales on board trains and confiscate bottles and cans from people trying to bring them on board.

According to an Irish Rail spokeswoman, the new rule was instituted in response to complaints of antisocial behaviour connected to alcohol consumption. She said other trains, such as ones to Sligo and Cork, did not produce as many complaints as the Galway and Westport lines.

“The vast majority of customers who wish to enjoy an alcoholic beverage on-board our services do so without impacting in any way on their fellow passengers,” she said. “But unfortunately there is a minority that do over indulge, particularly those travelling in large groups, who can disrupt others in a negative way.”

While most people surveyed were against the new rule, Conor Kelly (19) understands its benefits.

“I’m in favour of it,” he said. “Public drinking in general is a bit of a dodgy thing. Maybe we’re too accepting of it in this country.”

“Yeah, maybe it is the acceptance of it,” Treacy said. “There could be a stag party on the train and then they start drinking away... You almost force your brain to put up with it.”