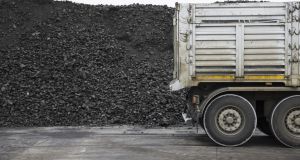 “If you took a truckload of coal today and took it across the Border, you could save €2,200. And next week you can save €3,300.” Photograph: iStock

Smuggling of coal from Northern Ireland will increase significantly after extra carbon taxes are imposed by Minister for Finance Paschal Donohoe in next week’s budget, fuel suppliers have warned.

The price of a bag of coal is set to rise by more than €1 if the Minister goes ahead with plans to increase carbon tax – which is designed to help cut CO2 emissions – from €20 to €30 per ton.

However, fuel suppliers in the Republic have argued that greater smuggling from Northern Ireland is inevitable because carbon taxes on domestic fuel are not levied there, while VAT is lower, too.

Coal is already being brought in from the North, often originating in Scotland. This coal often has a high sulphur content of up to 7 per cent and would not be allowed to be sold here, one senior industry figure said.

“We have had lots of instances of finding this coal in Tralee, Cork and Limerick, so it’s not just the Border regions,” said the figure, who called for “robust and visible enforcement” by the authorities.

“Our air is quite toxic. So this is a welcome move. However, if I was a smart man in Tyrone, the problem is that in the North there’s no carbon tax on domestic fuel and the rate of VAT is 5 per cent.

Half of all major Irish towns have air pollution figures that are 10-15 times higher than World Health Organisation permitted limits because they do not have a ban on polluting fuels, some in the industry argue.

Niall McGuinness, managing director of CPL Fuels Ireland, said his company did not have an issue with the carbon tax, but an increase of €1 per bag of coal is “very significant” for customers.

There is “no significant evidence” that the authorities in the Republic are trying to block smuggling: “There is evidence of people flouting the law,” he said.

Carbon taxes entered into force on May 1st, 2013, applying to coal and peat. The tax is paid by the first customer – that is, from one supplier to another established here, or from a supplier to a consumer here.

A ban on the burning of smoky coal and other prohibited fuels now applies in all low-smoke zones. A full nationwide ban is to happen from late next year.

Eight-thousand premature deaths have been averted since the smoky fuels ban was brought by Mary Harney during her time as minister of state at the Department of the Environment.