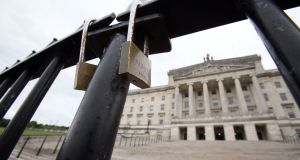 The Northern Ireland Assembly at Stormont has been suspended for three years. Photograph: Paul Faith/AFP/Getty Images

Minister for Foreign Affairs Simon Coveney and Northern Secretary Julian Smith are to hold talks with the North’s five main parties in Belfast on Monday in a post-election effort to restore the Northern Executive and Assembly.

And while the British prime minister Boris Johnson has yet to name his next cabinet it appears a given that Mr Smith will remain as secretary of state at the Northern Ireland Office.

On Sunday Mr Smith tweeted, “Good calls with all five party leaders this morning. Look forward to starting positive process tomorrow to get Stormont back up and running.”

He will be joined by Tánaiste Mr Coveney in leading this latest set of negotiations aimed at reinstating the power-sharing institutions which collapsed almost three years ago.

While the DUP in particular has been licking its wounds over the weekend following the loss of Nigel Dodds’s seat in North Belfast and Emma Little Pengelly’s in South Belfast, Mr Coveney said he believed all parties were anxious to get Stormont back up and running.

Mr Smith has laid down January 13th as the deadline for a deal, warning that if there is no agreement by then he will be obliged to call new Assembly elections.

Elections could be especially difficult for the DUP. Sinn Féin’s vote was also down in this election, notwithstanding its success in North Belfast.

All five main parties, particularly the DUP and Sinn Féin, were told by the public during the election campaign that they wanted Stormont restored so that pressing issues such as the current health crisis could be addressed by local politicians.

All the parties insisted they were anxious to reinstate the Assembly, and Dublin and Belfast believe there is now a real opportunity to break the political deadlock.

One of the main blocks to a deal is the Sinn Féin demand for an Irish language act, although there are other difficult obstacles to overcome as well such as dealing with the past and ensuring any restored Assembly is sustainable.

A previous contentious issue, same-sex marriage, was legislated for at Westminster, as was the liberalising of abortion law in Northern Ireland.

Mr Coveney said that Northern Ireland had had “three years of political stagnation” which has been “damaging and polarising not only for political parties but communities as well”.

“We need to get the institutions of the Good Friday [BELFAST]agreement functioning again and working for people so they can make even basic political decisions around healthcare, education, housing, infrastructure,” he told RTÉ’s This Week programme.

“We will be ready to go this week to work with the parties and to help them get that foundation in place for a stable Executive…I think all parties have now recognised, including the DUP, that they would like to move on,” he said.

The DUP Assembly member Edwin Poots said that the focus now must be on restoring the Assembly. “We are a devolutionist party. We want Stormont back. We never wanted Stormont collapsed; Sinn Féin collapsed it,” he said.

He added, “At the ballot box on Thursday, people across Northern Ireland sent a very clear message ahead of all-party talks this week - it’s time for politicians to get back to work. There were plenty of parties ready to commit to restoring the institutions during TV debates, now they have the opportunity to act accordingly.

Alliance leader Naomi Long said that this was the “last chance” to restore the Assembly. She said the clear message from the Westminster election was that people wanted a “new form of politics”.

“Every day this impasse continues, the public is suffering – people are losing their jobs, budgets are being slashed, organisations are going to the wall,” she said.

“The health service is currently facing a major crisis but that is likely to be followed in the near future by other crises in areas such as education and infrastructure, as well as the impending welfare mitigations cliff edge, and doing our best to protect Northern Ireland from Boris Johnson’s Brexit deal,” she added.

“If there is no successful resolution, the Secretary of State must call fresh elections and then it is over to the public to elect those who want to get on with the job of delivering for everyone.”

Ulster Unionist Party leader Steven Aiken said there was “little point in rushing back into Stormont simply because the DUP and Sinn Féin have decided that now the election is over they are willing to set their own differences aside”.

Any talks must be “on the basis of restoring sustainable, accountable and transparent government,” he added.